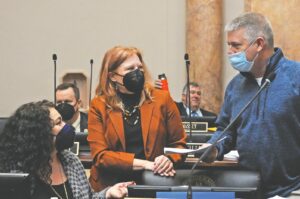 The state House of Representatives District 94, which includes Letcher County, would be stretched out to include an area more than 140 miles long under a redistricting plan proposed by Republicans and almost certain to pass the state legislature where the party holds a supermajority in both houses.

Some critics say the plan targets Rep. Angie Hatton, who is the House Democratic Whip, and other women legislators. The plan also places four Democratic women legislators in Louisville into just two districts, forcing the incumbents to run against each other.

Speaker of the House David Osborne denied that his caucus drew the new maps with politics in mind, calling them “compact, contiguous and Constitutional” in a news release.

““We have only one chance to draw it the first time, so it was important to us that we get it right. This proposal represents a committed effort to meet all legal considerations while maximizing every community’s influence to the greatest extent possible. We worked to make districts more compact, while still maintaining as much continuity as possible for constituents,” Osborne said. “We’ve accomplished those goals. This plan does not split a single precinct in the entire state. By comparison, redistricting plans passed by previous General Assemblies included as many as 153 divided precincts.”

Some candidates and organizations in Kentucky are already considering lawsuits against House Republicans over the redistricting plan, which was kept secret until December 30, one day before the New Year’s holiday.

The plan was not filed as a bill until Tuesday, three days before the deadline to file for election.

Incumbent 94th District State Rep. Angie Hatton said there was no staff at the Capitol and little data available to legislature members when the plan was released. Some information was given to her staff, but an email from Republicans later said more precincts in Pike County would be added to the list she was given.

That original list included 17,000 voters in Letcher County, which she already represents, 16,000 in Pike County, and another 7,500 voters in Harlan County. The Pike County district cuts out the downtown Pikeville area from the 94th and adds districts farther north.

Osborne said last week that the districts are all within the plus or minus 5 percent population required by the court, and don’t split any precincts.

“We tried to make those districts as compact as possible, and as easily to navigate as possible, and compactness is a little bit difficult in some areas of Kentucky simply because of geography,” Osborne said. “It’s one thing if two counties adjoin, but if you have to drive through other counties, it’s not a very compact community.”

The 94th District now includes all of Letcher County and a narrow hook along US 23 in Pike County that takes in a large portion of the city of Pikeville. The new district would eliminate Pikeville from the 94th District and instead runs the boundary all the way north to the Kentucky-West Virginia- Virginia border, taking in a large chunk of the 93rd District, now represented by Republican Norma Kirk- McCormick of Inez. To the south, it would extend along the Harlan County-Leslie County border to around Foundation Gap on the Harlan Leslie-Bell County line, about 30 miles north of the Tennessee state line. That area is now represented by Republicans Chris Fugate of Chavies and Republican Adam Bowling of Middlesboro.

Google map shows the route is more than 140 miles long and goes into at least one other state to reach the northernmost point on the map.

“Basically, I’ll have the whole Virginia line and it’ll take me three hours to drive from one end to the other,” Hatton said.

She said proposed district gives her district only one precinct in Cumberland, and none of Benham and Lynch, which used to be in the district.

“Honestly, it is such a terrible disservice to the voters,” she said.

“Fayette County had 10 reps and now they have nine, even though their population grew,” Hatton said.

She said the 10th District now includes only a small part of Fayette County, which is primarily Democratic, and makes up for the population difference by adding Republican-leaning rural areas around the city.

Fran Wagner, president of the Kentucky League of Women Voters, said her organization has not been given enough information to know all of the things the map does.

“We can’t support the districts as they are drawn for several reasons,” she said.

“They seem like they’ve been divided to protect incumbents and not to protect the voters,” Wagner said.

“Of course our other big objection is the time frame. Any public input is impossible,” she said.

Wagner said she did not know if the intent was to target women, as some critics have said, but “we’re looking at it real carefully.”

Hatton noted that there have still been no maps released for the U.S. House of Representative’s race, even though the deadline for candidates to file is Friday.

State Senate President Robert Stivers and Osborne said they expect to pass a bill today extending the deadline to January 25. It was not clear whether Gov. Andy Beshear will sign the bill or if he will veto it. The governor has 10 days to veto any bill, which would put the new maps after the deadline for filing and potentially force the districts to remain as they are until they can be addressed in a more public manner.

At least one local candidate, speaking anonymously, said he has been told lawsuits will be filed against the Republicans as a result of the map, and said he will join it if possible. While the maps would not affect the office he is seeking, “it’s just not right.”

Any citizen of Kentucky has standing to file a lawsuit challenging redistricting.

“So, why should Kentuckians care about any of this?” Hatton asked recently. “Because those drawing these maps hold tremendous power — power to dilute or amplify your voice as a voter; power to protect incumbents and legislative majorities; and power to make primaries far more important than general elections, the chief reason behind our growing political divide.”

She added: “As important as it is, redistricting doesn’t exactly generate the headlines we routinely see for controversial cultural issues and budgetary matters. It can seem dry and obscure to most, since the bills are filled with Census and precinct data guided by a dizzying array of legal rules. The final product is little more than several color-coded maps that are difficult to decipher without expertise and hours of study.”