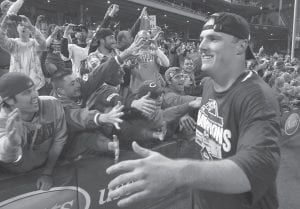 Jay Bruce raised both index fingers as he rounded first base and took the final steps toward a long-awaited championship. Jubilant Reds teammates streamed toward the plate while fireworks went off overhead.

Bruce homered on the first pitch from Tim Byrdak leading off the ninth inning Tuesday for a 3-2 victory over the Houston Astros, securing an improbable NL Central title for a franchise that has gone through some of the worst times in its history.

Nine straight losing seasons. A 15-year playoff drought. All washed away with one home run and an eye-stinging clubhouse spray.

“There’s nothing like it,” said Bruce, who repeatedly got doused with bottles of Korbel champagne and 24-ounce cans of beer in the clubhouse.

The 23-year-old outfielder, part of Cincinnati’s young nucleus, provided a fitting finish to the championship drive. Cincinnati has won 22 games in its last at-bat, second-most in the majors. 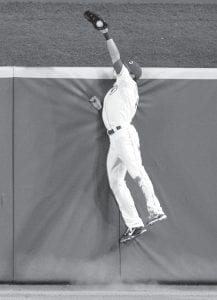 Drama found them all season as they got into contention early, then held off the heavily favored Cardinals in a tight-as-could be race.

“When he hit that one up there, there was a big sigh of relief and the party was on,” manager Dusty Baker said. “I’m as happy as a man can be. This is sweet. This is a special group, special guys and a special feeling.”

With the latest title, Baker joined Bill McKechnie as the only managers to lead three diff erent NL teams to the playoffs. Baker also has made it with the Giants and Cubs.

There could be more drama left.L

eft-hander Aroldis Chapman (2-2) pitched a perfect ninth, topping out at 101 mph while showing playoff opponents the nasty stuff they can expect in a week or so.

The Reds sold 30,151 tickets for the clinching game — aboveaverage for a cool September weeknight — and took the field almost tasting it. Second baseman Brandon Phillips said he doesn’t drink and has never taken so much as a sip of champagne.

Most Reds were novices at the sip-and-spray tradition. Four female fans in the upper deck wore shirts that, side-by-side, urged the home team to “Show Us The Bubbly.”

The crowd was on its feet in the sixth, when the Reds loaded the bases with none out. Phillips tied it at 2 with an infield single to the hole at shortstop, but Bruce grounded into an inning-ending double play.

Bruce made up for it on his next swing. Byrdak (2-2) left his lone pitch right down the middle — a perfect spot to start a celebration.

“You never want to see that,” Byrdak said. “We wanted to win all three games and make them clinch against somebody else.”

Soon, the red carpeting on the home clubhouse floor was sopped for the first time since Great American Ball Park opened in 2003.

“We’re not finished, but it doesn’t get any better than this,” said owner Bob Castellini, a box of cigars cradled in his left arm and a bottle of champagne in his right hand.

The Reds celebrated their title a day after Philadelphia clinched its fourth straight NL East title — no surprise there. The Reds’ recent history made them a most unexpected playoff team.

The Reds hadn’t reached the postseason since 1995, when Davey Johnson took them to the NL championships series, then lost his job because owner Marge Schott didn’t like him.

After that, Cincinnati lost its way.

The Reds went through three owners, five general managers and seven managers without once making it back to the postseason. They came close in 1999 under Jack McKeon, losing a playoff for the wild card to the Mets. Ken Griffey Jr. arrived the following year, raising expectations for a long run of division titles. Instead, the bottom fell out.

Griffey was hurt often and the Reds plunged into a streak of nine straight losing seasons, their worst in a half-century. Not even the move into Great American made much difference. Junior came and went. The losing went on.Cincinnati finished fourth last season, its second under Baker, but the franchise thought it had the makings of something and kept the roster intact.

The Reds got into the race in mid-May and didn’t crack under pressure. Instead, the defendingchampion Cardinals fell apart. The two teams were separated by no more than three games from mid-May to mid-August, matching each other win-for-win.

An emerging core of young players pulled it off .

First baseman Joey Votto grew into an MVP candidate this season, ranking in the top three in batting, homers and RBIs. The Reds’ youth-laden lineup became the NL’s most prolific, leading in batting average, runs and homers. The defense became one of the NL’s best.

And Chapman put some sizzle in the stretch drive when he was called up in August and hit 105 on radar guns.

It was an emotional night for Baker, who won his fourth division championship as a manager. He also took the 1997 Giants, 2000 Giants and 2003 Cubs to the playoffs. He’s the ninth manager to lead three diff erent franchises to the playoff s, joining McKechnie, Johnson, Tony La Russa, Jim Leyland, Billy Martin, Lou Piniella, Joe Torre and Dick Williams.

“So I just knew when the season started that my dad was with me big-time.”

The Reds won’t be a postseason favorite, given their inexperience and their struggles against other top teams. They’ve gone 58-28 against losing teams, only 30-41 against those with .500 or better records.

For them, just getting there was a breakthrough.

NOTES: SS Orlando Cabrera was back in the Reds lineup after leaving Sunday’s game with a sore left side.