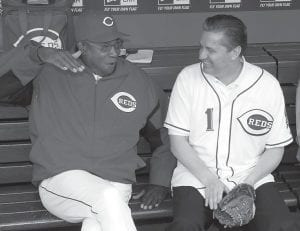 Calipari was given a Reds jersey with his name and the No. 1 before a game against the San Francisco Giants on Tuesday. Calipari, three of his assistants and some members of the university’s athletics department were introduced on the field with the championship trophy.

Many of the fans at Great American Ball Park wore Kentucky blue and cheered Calipari, some of them waving Wildcat banners. There were a few boos — some Cincinnati basketball fans unhappy over the Wildcats’ appearance on the field.

Kentucky is an important part of the Reds’ regional fan base. Their Triple-A team is in Louisville.