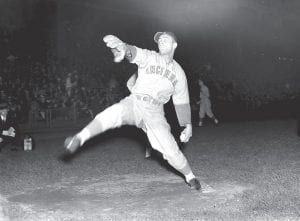 Cincinnati Reds’ lefty Johnny Vander Meer warmed up before a game against the Brooklyn Dodgers which marked the first night game at Ebbets Field, June 15, 1938. Vander Meer added to the historical significance of the game by pitching his second consecutive no-hitter, a Major League baseball record that still stands. (AP Photo)

Johnny Vander Meer, a hard-throwing lefty, was just 23 in 1938, his first full season in the majors. In his one season in the minors, he had struck out 295 batters, but was prone to wild pitches. In spring training in 1938, Pitching Coach Bill McKechnie helped Vander Meer to harness his power into throwing strikes. The training quickly paid off: On June 11, Vander Meer pitched a Saturday afternoon game for the Reds against the Boston Braves. He didn’t allow a hit in nine innings, and of the 28 batters he faced, he walked three and struck out four. It was the first no-hitter thrown in the National League since 1934 and the first nohitter by a lefthander since 1931.

Four days later, Vander Meer pitched in the first night game in New York in big league history. Ebbets Field, home of the Brooklyn Dodgers, turned the lights on for the first time, drawing a sell-out crowd of 48,000. Although the lights overshadowed Vander Meer’s return to the mound, he soon pitched himself back into the story. In the seventh inning, Vander Meer walked Cookie Lavagetto and Dolph Camilli to put a runner on second, the first time the Dodgers had a runner on second all game. Vander Meer worked his way out of the jam, and headed into the ninth inning looking for his second no-hitter in a row.

The crowd buzzed with anticipation in the bottom of the ninth, with the Reds leading 6-0 and Vander Meer poised to make history. After fielding a lazy ground ball hit by Dodger left fielder Buddy Hassett to lead off the inning, Vander Meer began to show signs of nerves. He proceeded to walk the bases loaded with one out, bringing centerfielder Ernie Koy to the plate. Koy hit a dribbler to Reds third basemen Lew Riggs, who, afraid of making a mistake, threw home to catcher Dolph Camilli instead of turning a double play. With two outs and the bases loaded, Dodger shortstop Leo Durocher stepped up to the plate. Durocher had a habit of delivering clutch hits, but after walloping a foul ball into the stands in right field, Durocher managed only a slow fly ball to center field, where Harry Craft gloved it for the final out to secure Vander Meer’s place in history.

The two no-hitters were part of a nine-game win streak for Vander Meer in 1938. Many believe that Vander Meer’s record of two consecutive nohitters is the baseball record least likely to be broken, as to do so would require a pitcher to throw three consecutive no-hitters, a nearly unimaginable feat.