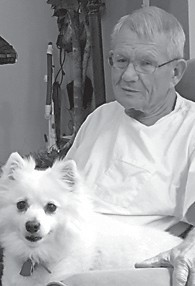 Reginald ‘Reggie’ Lee Sexton, 73, of Hoover, Ala., died May 29 at Lake Cumberland Regional Hospital with his daughter, Karen, in attendance.

The son of the late Leroy and Viola Sexton, he was the widower of Sherry Lee Mullins Sexton.

Mr. Sexton had served in the U.S. Navy, and he loved being surrounded by his family and especially his beloved dog, Shelia. He referred to his beloved grandchildren as his “A, B, C’s,” and loved football and cheering for the Alabama Crimson Tide.

Sur viving are two daughters Karen Sexton and Nancy Sexton Shaar, and three grandchildren, Adam and Blake, both of Hoover, Ala., and Chloe of New York.

Funeral services for Mr. Sexton will be held in Hoover with full military honors, and will be announced at a later date.