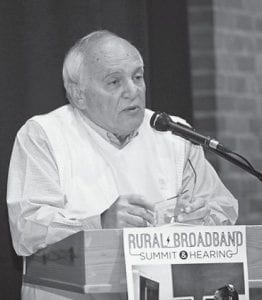 RUS Administrator Jonathan Adelstein was the guest at the “Rural Broadband Summit and Hearing” hosted by the Center for Rural Strategies, Free Press and the Center for Media Justice. The twoday event was organized so issues surrounding lack of broadband Internet access could be aired by major players in Central Appalachia, including representatives of the Appalshop, media and arts cooperative, the Central Appalachian Regional Network, local politicians, phone-company employees and other local residents.

Adlestein, a former member of the Federal Communications Commission, was instrumental in implementing a recent expansion of broadband services made possible through $3.5 billion in economic stimulus funds to RUS. Kentucky received $300 million, more than any other state, because Adlestein said RUS “recognizes the challenges” to broadband expansion in the commonwealth.

“These areas are desperately in need of this kind of investment,” he said, adding that 30,000 jobs nationwide would be created to build broadband networks. He said once these networks were built, they would be a solid foundation for job creation and economic growth for decades.

Adelstein said the nation faces “relentless” global competition, noting that China is trying to “outinnovate” America in any way possible, so the U.S. can’t afford to let any of the 50 million people living in rural America fail to have broadband access.

“We’re going to out-innovate, out-educate and out-build (the Chinese),” he said. “We want to keep our advantage to compete in this world.”

How to achieve universal broadband access has become a “hot debate” in Washington, mainly because of a plan the FCC could implement this month. Adelstein said it would restructure the Universal Service Fund that now subsidizes rural telephone service with a tax on phone bills while keeping phone rates affordable, connecting rural schools, libraries and healthcare facilities with high-speed data service, and supporting low-income consumers.

Rural phone companies argue that cuts in their subsidies would force them to raise prices, and that funds for expansion would shift from local carriers to national carriers, who often don’t extend broadband or cell phone service to many rural areas, saying not enough people live in those places to justify coverage.

Adelstein said the FCC believes Americans need to communicate and be connected to one another, and for any sort of technology like that to work, the 16 percent of Americans living in rural areas need to have access to modern broadband services. He said that in order for universal broadband access to become a reality, everyone would have to “tighten their belts” because resources are limited. He suggested small carriers would have to scrutinize their costs, make offerings more competitive, find new sources of revenue and create better business models.

“I hope and expect the FCC will make clear that solving lack of rural investment among large carriers need not come at the expense of those rural carriers that have proven forwardlooking, long-term investments in their communities,” Adlestein said. He said small, local carriers often have better infrastructure in rural areas than larger, non-rural companies. Some of those large carriers haven’t been investing in rural America, he said, and this has prompted RUS to start “Build Out and Build On,” a program designed to promote broadband expansion to all areas of the country and then to create new businesses on top of those new broadband networks.

“ There is a mistake of viewing policies like universal service … as some sort of favor for rural America – some kind of gift for rural America – and that is not what it is,” Adelstein said. “A partially connected America makes about as much sense as building highways which only connect about 35 percent of the time.”

A panel of people from the region added to the discussion by providing examples of the importance of broadband access for those living in southeastern Kentucky, southwestern Virginia and West Virginia.

Beth O’Connor of Virginia talked about telehealth, an Internet service that, only with broadband, connects health care professionals to people in rural areas that may not have access to such professionals where they live. Josh May, who works for a non-profit organization promoting community development in Magoffin County, said 2,000 people in the southern end of the county don’t have access to broadband or cell phone service, something the community has been trying to change for years with no success. Many of those in attendance spoke of spotty cell phone service and lack of broadband access as a hindrance to economic development and education, and said that access must be expanded to rural areas to help “level the playing field” with the rest of the country.

The Rev. James Patterson of the Partnership of African-American Churches said everyone pays the price for lack of access to broadband. He spoke of a “digital exclusion” which prevents jobs from being created, establishes a lack of opportunities, as well as a lack of education and participation in democracy in communities where access is sparse.

Mark Kidd of Whitesburg said the local school system was trying to pass a program to telecommute with students on snow days, but 20 percent of high-school students in Letcher County don’t have access to broadband, essential for such a program.

Nathan Hall said he was in remote India recently and had better cell phone and broadband service than at his home in Floyd County. He said broadband was essential to economic development in eastern Kentucky, where people could operate businesses and sell goods online with broadband.

Joe DePriest, the economic development director in Letcher County, said outside businesses wishing to locate to the area ask him first whether or not broadband access is available in the county and won’t locate there unless it is.

Jenkins Mayor G.C. Kincer told the audience how he brought wireless broadband to downtown Whitesburg when he owned and operated WIFX-FM because no one else would.

About the time he hit 50 customers, Kincer said, “the phone company sort of speeded up their investment,” and provided broadband at lower prices, so he shut down his service.

“That’s when I figured out that if we were going to solve this problem of broadband access, it’s going to have to be a community solution,” Kincer said.

Adlestein said he will report the comments to the White House Rural Council, a group of cabinet- level Obama administration appointees, which he said considers expanded broadband access “one of the pillars of revitalizing communities.”

Ivy Brashear is a reporter for The Institute for Rural Journalism and Community Issues, based in the School of Journalism and Telecommunications at the University of Kentucky.