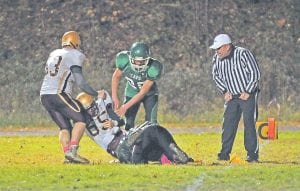 The regular season came to an ugly end for Jenkins football.

The Cavaliers’ 2015 senior night game against visiting Pineville last Friday was marred by a large number of penalties and a fight that resulted in Jenkins junior Austin Fields and Pineville junior Kevin Sexton being ejected from the game. Pineville also routed the Cavaliers 56-6, to finish off the Cavaliers’ season with an abysmal 1-9 record.

Friday’s game began to come off the rails in the first quarter with several penalties being levied against the “chippy” Pineville Mountain Lions. Although the penalties benefitted the outmanned and overpowered Cavaliers, the circumstances of them also riled the Jenkins fans, some of who left the bleachers and came to the Jenkins sideline.

The ire of the Cavalier fans spilled onto the field and during the second quarter Fields and Sexton began trading blows before being separated by respective teammates.

After the fight, some Jenkins faithful began verbally engaging Pineville players on the field from the sideline, resulting in one Jenkins fan being ordered to leave the sideline and return to the bleachers. Soon, the officials ordered the entire Jenkins sideline, as well as the adjacent walking track, cleared of everyone except football players, coaches and members of the media.

Members of Pineville’s coaching staff confronted the officials during halftime and were ordered to return to their side of the field.

The tensions within the game overshadowed the play on the field, where Pineville built a lead forcing a running clock throughout the second half of the game, which ended with Jenkins losing by 50.

Jenkins’ Audie Fields finished the game with 16 rushing attempts for a total of 67 yards, while Jenkins quarterback Darian Slone had 43 yards on three passing attempts. Slone also scored the lone Jenkins touchdown on the night.

The Cavaliers will face the Harlan Green Dragons on the road Thursday at 7:30 p.m. in the opening round of Class 1A playoffs. Pineville, which finished the season at 7-3, will face Hazard in their playoff opener.