Reid Travis is the new, but ‘older’ kid in town 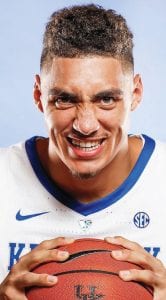 Reid Travis feels like a new kid on the block.

Although the former Stanford standout has played college basketball for four years, he’s starting over as graduate transfer at Kentucky as he pursues his master’s degree. Travis said there are similarities between the two programs and considers the unique situation a “split deal.”

“There’s going to be different ways of doing things and I just have to be humble enough in that aspect that I look to guys that are probably younger than me for advice on how things are done. So I think the biggest thing is to have an open mind, be humble and just accept everything that comes with being in a new situation.”

Travis plans to rely on the newcomers and veterans for guidance and isn’t afraid to ask questions from his new teammates.

“The biggest thing I wanted to do in this situation was to be openminded and to be humble,” he said. “What comes along with that is not being in a situation where he can’t get advice from 18- or 19-year-old guy and that they can’t help you get better at your game. I think that’s what I’ve done here, being able to understand that maybe there are things they can help me with. The biggest example of that is with all the sophomores we have on this team. They’ve been through the battles and they’ve been here at Kentucky for a full year (and) they understand how coach works, what the system is and how we do things here as a program.”

Travis said it’s not easy to compare his previous stop to his current home, but said both programs offer a unique perspective.

Travis brings plenty of experience to the table and will be counted on to carry a bulk of the load in the post.

In addition to providing scoring and rebounding underneath, Travis also will be leaned on to provid leadership on and off the court, and considers himself a vocal leader and one who also leads by example.