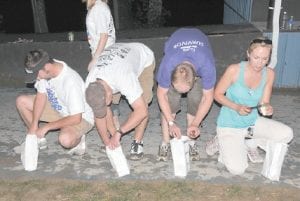 For the second year in a row more than $100,000 was raised during a Relay for Life event in Letcher County to benefit the American Cancer Society.

“We just truly had a phenomenal year,” said Alberta Perry, chairperson for the Letcher County Relay for Life Committee.

This is the 14th year Letcher County residents have participated in a Relay for Life event.

“I think people are finally realizing what we are doing,” said Perry.

Money is raised during the year through various fund-raisers including bake sales, carwashes, golf scrambles and raffles.

“This year I saw more people working for Relay for Life than I have ever seen,” said Perry. “There was just something going on every weekend. We have so many people who have worked so hard.”

Ashley Johnson (left) didn’t let heavy rains dampen her spirit during the Relay for Life event at Riverside Park in Whitesburg. (All photos by Chris Anderson)

Becky Pigman, an employee at Whitaker Bank, turned in $870, which is the most collected by an individual in the county. Bambi Pelham, of Jacksonville, N.C., raised $1,120 by encouraging her Facebook “friends” to donate money through the Relay for Life’s website.

All those who raised funds gathered at River Park Friday night to raise cancer awareness, celebrate cancer survivors and remember those who have died from cancer.

People setup tents along the track and participate in diff erent activities throughout the night. Perry said more than 800 attended this year’s event with about 50 people staying until 7 a.m. on Saturday.

Perry said a heavy rainfall knocked over some tents before the event began. At the beginning of the event, cancer survivors walk a lap around the track. Later on in the festivities, luminaries are lit in memory of those who died from cancer.

“More and more people are being diagnosed every day,” said Perry. “You are either touched directly or indirectly.”

Perry said Travis Morton, a 16-year-old Jeremiah teenager who is battling a rare form of cancer, was named honorary chairperson at the Relay for Life event.

“That kid is truly amazing,” said Perry. “He is truly determined. He is an inspiration.”

Last November a number of fund-raisers were held in the county to help pay his medical bills.

In 1985, Gordon Klatt, a colorectal surgeon from Tacoma, Wash., walked around a track at the University of Puget Sound in Tacoma for 24 hours to raise money for the American Cancer Society in honor of his patients. Klatt raised $27,000 by walking about 83 miles with people paying $25 to walk with him.

In 1986, Klatt organized a small team of people to walk with him in what was the first Relay For Life event. Now millions of people participate in Relay for Life events in more than 5,000 communities nationwide.

Letcher County residents receive services from two programs that started in the county two years ago.

The “Look Good, Feel Better” program helps cancer patients who have lost their hair receive wigs and turbans. Members of the program also receive a free makeup kit and meet with Charlene Mason, co-owner of the Copper Comb Beauty Salon. Mason teaches cancer patients how to care for their hair and skin while going through treatments. The next class will meet in August. To make a reservation, call Mason at 633-2426.

“These are wonderful programs,” said Perry. “We have been fortunate enough to help people.”