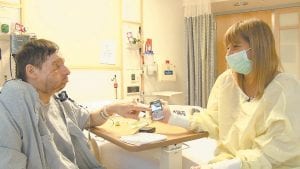 In this publicity image released by ABC News, James Maki is shown with his daughter after Maki underwent a face transplant procedure at Brigham and Women’s Hospital in Boston. The story of James Maki is contained within “Boston Med,” an eight-part prime-time series about the inner workings of three hospitals that premieres on Thursday (June 24) at 10 p.m. on ABC. (AP Photo/ABC News)

ABC’s remarkable program bringing together the recipient of the nation’s second face transplant and the donor’s family may someday stand as a bittersweet reminder of what broadcast news divisions can do at their best.

The story of James Maki and Joseph Helfgot is contained within “Boston Med,” an eight-part, prime-time series about the inner workings of three hospitals. It premieres tomorrow (June 24) at 10 p.m. It’s the sixth of similar limited-run series that producer Terry Wrong’s ABC News unit has made in the past decade, beginning at the Johns Hopkins Hospital in Baltimore and including looks at New York City police officers and the Boston mayor’s office.

“Boston Med” took months of work, weaving in the professional and personal lives of doctors, nurses, residents and the patients they encounter. It was personnel and time intensive, completed at the same time ABC cut a quarter of the news division’s staff because of the economy, and leaving in doubt how many such ambitious projects are in its future.

It took all that time, and a serious stroke of luck, for ABC to get what it did.

Wrong’s team had gone into the home of Helfgot and his family to show what their lives were like as the Hollywood marketing executive waited for a heart transplant. A donor heart was found but the transplant was unsuccessful. Helfgot died.

While “Boston Med” isn’t all about happy endings, Wrong’s team had room for only so much heartbreak. With all the other stories they were following, Helfgot’s was cut.

Meanwhile, Maki and his doctors had agreed to have ABC’s cameras follow his hoped-for face transplant. The Massachusetts man was disfigured in June 2005 when he fell onto the electrified third rail at a subway station.

Not until the Boston Globe broke the story was it known that Maki received a portion of Helfgot’s face. Even though she had cooperated with ABC for the story of her husband’s heart transplant, Helfgot’s widow said she hadn’t planned to tell the network that her husband was the face donor.

“My family was grieving,” Susan Helfgot said. But she agreed when approached again by ABC.

“The fact that it became public gave me the opportunity … to let Terry tell the story in a way that he would not have been able to otherwise,” said Helfgot, who is writing a book with Maki about the experience in an effort to encourage organ donation.

Her decision to cooperate rounds out the story in an almost unfathomable way. A viewer sees video of a vibrant man talking about his family and plans, then later sees part of his face sewn into another man’s. ABC’s cameras are there when Susan meets Maki for the first time, seeing her late husband’s face on a live stranger.

ABC doesn’t flinch at what can be uncomfortable pictures, even briefly showing part of Helfgot’s face in a tray waiting for transplant. Maki’s pre-transplant disfigurement is shown but not lingered upon, once seen from behind as he passes by a mirror.

“We knew it was a very powerful hour because the people who were involved were so generous with their time,” Wrong said. “It was television magic.”

From a screening room at ABC’s New York headquarters recently, Maki and Helfgot watched the episode with interest. He has no memory of his accident or from the several months afterward, and was fascinated to watch plastic surgeon Dr. Bo Pomahac and his team in action during the surgery.

He said the operation has improved his life considerably and he hopes illustrating the story will encourage others who might need similar help.

Seeing film of her husband alive again on a big screen was emotional for Helfgot. She said it was a shock, after her husband died, to be asked to donate his face. But she could appreciate what Maki was going through after her family’s wait for a donor heart.

That transplant story consumes a single “Boston Med” episode, scheduled for Aug. 12. Other episodes of “Boston Med” weave diff erent stories throughout the hour: a resident who blames work for the break up of a relationship; a brain surgeon mistaken for a custodian by a patient. Cameras catch the unusual sight of one doctor whose mistake in a pediatric case proves deadly.

Wrong said he’s picked up techniques of “reality” television, including placing greater emphasis on personal stories. His reality TV has the advantage of being actually real, he said.

Given ABC News’ downsizing, it’s logical to wonder whether there is much of a future for such projects.

Wrong has no commitment on any future, similar series, although he said that’s not unusual; its future depends on whether its ratings are strong enough that ABC will want more. He has shown an ability to adapt. ABC News executive Phyllis McGrady cited Wrong’s unit for pioneering some of the less intrusive and cheaper camera work the network sees as a model for the future, and Wrong’s entire team — up to 40 people during peak work on “Boston Med” — is freelance.

“You like to think what you’ve created is wonderful enough that people will want more of them,” he said.