Remember The Weekly Reader? If so, let Ike know 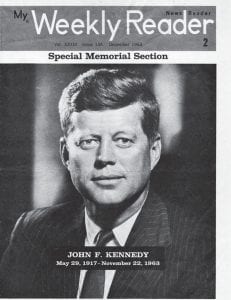 Pictured above is the cover of a special section that accompanied an edition of The Weekly Reader published in December 1963 in the weeks following the assassination of President John F. Kennedy. Some three years before, elementary school readers of the publication took part in a poll asking whether Kennedy or then-Vice President Richard M. Nixon would win the 1960 presidential race.

I’m wonder how many of you readers remember from your elementary school days a publication called The Weekly Reader?

It was a publication that teachers subscribed to and shared with students in specific grade levels from kindergarten through sixth grade.

I assume the school board covered the costs of the subscriptions, or maybe we students peddled candy bars door to door to raise the funds, but I’m reasonably sure the little magazine came every week and we students took turns reading it while our teacher was busy giving lessons to one of the other classes in our room. It was entertaining to those of us who loved to read. It was also educational in that it gave us glimpses of what life was like in other parts of the country and the world.

The thing I remember most specifically about The Weekly Reader is that it allowed students to participate in both presidential elections that occurred during my grade school days. The first mock election took place in 1956 when Eisenhower polled around 70 votes and Stevenson 0 at Blair Branch. Even though the magazine had no edition for seventh and eighth graders, I believe those grades were allowed to participate in the mock elections.

In 1960, Richard Nixon received the vast majority of the votes, but John F. Kennedy received a scant few despite the anti-Catholic bias that pervaded Blair Branch and the fact that a lot of its residents claimed that the devil was a Democrat. I know at least three people still living there who still make that bigoted claim.

My family and a few others subscribed to Life and Look magazines that were replete with photographs of Jackie Kennedy. I am one of the few students who voted for JFK simply because I thought Jackie was the most beautiful woman in the world at that time. Thank the Lord for secret ballots, and rest assured that I never told my parents or my teacher about my “treachery.” I suspect that the other three or four students who voted JFK will take that secret to their graves and I’m only confessing now because my parents are long deceased.

Anyway, after the election was over our teachers mailed the results back to the magazine publishing company where they were tabulated with those of thousands of other schools across the country. I don’t recall who won the 12-yearolds and under national vote in 1956, but I do recall being secretly pleased with myself when JFK defeated Nixon.

Wikipedia, the Internet encyclopedia, says that Weekly Reader mock elections have correctly predicted the outcomes of the real presidential elections 13 out of 14 times. The lone exception was 1992 when elementary school students cast slightly more votes for George W. Bush than they did for Bill Clinton. I don’t believe they did a mock election in 2016 because the print publication shut down in 2012 when it merged with a periodical called Scholas tic

I’m not sure if my kids were exposed to The Weekly Reader when they were in school, and as I sit here writing this column (already past deadline) there’s no way of finding out because they would be upset if Dad called them at work for anything short of a dire emergency. And even then they would want to know why it couldn’t have waited until they got home.

Loretta says she remembers the magazine well from her days at Kingston Grade School (Madison County) in the 1950s. I’m simply wondering whether or not other folks remember The Weekly Reader and enjoyed it as much as we did. This is nothing more than idle curiosity, but I would appreciate your dropping an email to ikeadams@aol.com if you have such memories. There’s no use in trying to call me on the telephone because Mr. Parkinson rarely allows me to have a phone conversation. E-mail is about the only way I can communicate unless we’re standing face to face and even then you’d have to put up with me saying “What? Would you say that again.”