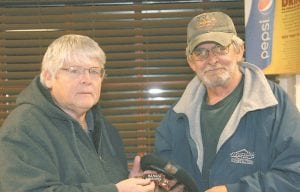 Bobby Fisher, right, of Whitesburg, shows the flashes and company beret that Fisher and late Sergeant Omer Price Carson of Wolfe County wore when they were assigned to H Company/75th U.S. Army Rangers and went on long-range reconnaissance patrols to gather intelligence in Southeast Asia. Pictured at left is Allen Booth, a relative of Carson’s who came here to meet Fisher, who was serving with two-time Silver Star winner Carson when he was killed in Vietnam at age 19 by enemy shrapnel. Carson, who planned to attend medical school on the GI Bill, died in action December 7, 1970, only 18 months after graduating Wolfe County High School. Fisher, who owns a soil reseeding service in Whitesburg, is one of four Army buddies of who have kept in regular touch with the Carson family in Wolfe County since the sergeant was killed. “The highlight of a recent trip through eastern Kentucky was my getting to meet Bob Fisher,” writes Booth. “We were captivated by his conversations. How can we ever show these men the respect and honor they deserve for what they endured in Southeast Asia?” As Booth pointed out as Veteran’s Day came and went Tuesday, the Vietnam Memorial Wall holds the names of 58,300 men and women whose deaths remind us that “freedom isn’t free.”