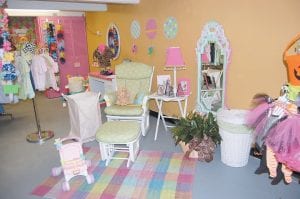 Two years ago, three men bought the old Craft’s Department Store in downtown Whitesburg not really knowing what to do with all of the space in the large building on Main Street.

William Wright, his son Charlie Wright and their friend, J.R. Brock, joined together as Ken Jon LLC to invest in the brick building, which consists of offices, apartments and storage space.

On the side facing Main Street, a space once occupied by Craft’s Department Store, Charlie Wright and his brother-in-law, Matt Turner, have spent the last year renovating the first floor of the building into a restaurant to be called StreetSide Grill and Bar, which Charlie Wright hopes will be finished in late November or early December.

In the basement of the building is a new consignment store called Raegan’s Closet on Main. The shop is owned by Charlie Wright’s mother, Jolinda Wright, and has been open for the last few weeks.

Upstairs in the building is another new business, Grins N Giggles Photography, which specializes in children, family and newborn photography. 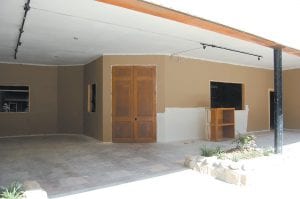 Charlie Wright, who is a grandson of the late Letcher County Court Clerk for whom he is named, observed how other restaurants are set up across the state and liked the idea of having a patio with several ceiling fans twirling from above.

“We had so much room inside we decided to make a patio so people could eat outside,” said Charlie Wright, who owned Tazwell’s bar in Richmond for three years. “It’s something diff erent for the area.”

Charlie Wright said 154 people can be seated inside and 53 outside. The inside of the restaurant has about 4,000 square feet of space. A 1,000 additional square feet can be found outside.

“I’m so excited,” said Charlie Wright. “There’s something about (this) business that has always appealed to me. I’ve always wanted to have my own restaurant.” 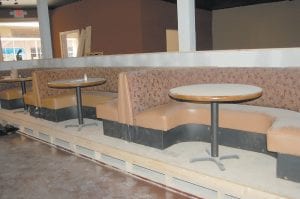 OPENING SOON — StreetSide Grill and Bar, which is owned by William Wright, his son Charlie Wright and their friend, J.R. Brock doing business as Ken Jon LLC, could possibly open before winter. Pictured above are horseshoe booths which will allow customers to easily view one of many flatscreen television sets.

Seven flat-screen television sets will be mounted above a 35-foot bar. A large screen projector and several more televisions will be placed throughout the restaurant and a few will be on the patio, too.

“Anything anybody wants to watch or request we are going to show,” said Charlie Wright.

The restaurant’s menu will include chicken wings, chicken fingers, onion rings, potato wedges and other appetizers. Charlie Wright said the menu will expand over time.

Charlie Wright has paid much attention to detail. Through eBay, he found some old, wooden doors in Tulsa, Oklahoma that were once used on the 55th floor of a bank building. He flew to Tulsa and drove back with a truckload of doors, which vary in design.

Some of the booths were found at a Habitat for Humanity store in Cincinnati.

“I probably looked for nine months before I found the booths I wanted,” said Charlie Wright. “I’ve not really bought anything new. I don’t like the brand new look. I want it to be nice.”

Charlie Wright said people are curious about the new restaurant.

“I will have 20 people a day wanting a tour,” said Charlie Wright. “It’s a lot bigger than everyone thinks. Everybody is shocked.”

Raegan’s Closet on Main is named after Jolinda Wright’s granddaughter.

“I think it’s a nice thing to offer the community a consignment shop since we don’t have many places to shop,” said Jolinda Wright. “The timing of this might be right.”

Those who bring in items to sell are called consigners. They receive 50 percent of everything of theirs that is sold in the store. Raegan’s Closet sells children’s furniture, gently-used clothes and toys. Maternity clothes are also for sale.

At least three different women sell their handmade bows out of the consignment shop. Blankets and crochet hats made by local woman are also displayed in the shop.

“I like the fact that I am giving a home to creative people in Letcher County for their homemade goods,” said Jolinda Wright.

The shop is brightly decorated with children in mind.