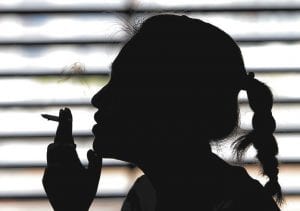 About 80 percent of the world’s 1 billion smokers are men, but more women are picking up the habit as products and advertising cater to them. (AP Photo)

With half of all men in some developing countries already hooked on cigarettes, the tobacco industry is now courting lucrative new customers — young women, a new report says.

About 80 percent of the world’s estimated 1 billion smokers are men, but more women are picking up the habit in some countries as flavored products and glossy feminine packaging cater to them. Nationwide surveys in Bangladesh, Thailand and Uruguay found that females aged 15 to 24 were more aware of tobacco marketing than older women, suggesting that advertising is directed at them.

The data were the first batch to be analyzed from the Global Adult Tobacco Survey, a large sampling of 14 developing countries that hopes to provide a clearer picture of how tobacco is used and promoted. It was the first standardized comparison of countries on tobacco.

The results published Thursday in the Morbidity and Mortality Weekly Report, a publication of the U.S. Centers for Disease Control and Prevention, focus on gender diff erences regarding use and attitudes toward tobacco. The CDC Foundation helped to conduct the surveys, along with the World Health Organization and other partners.

The results showed that in Bangladesh and Thailand, about 45 percent of men smoke, compared to 2 percent or 3 percent of women, respectively. In Uruguay, the gap was smaller with 31 percent of males versus 20 percent of females.

“Tobacco companies target women and girls with aggressive and seductive advertising that exploits ideas of independence, emancipation, sex appeal, slimness, glamour and beauty,” Johanna Birckmayer, director of international research at the U.S.-based Campaign for Tobacco-Free Kids, said in an e-mail.

They are “successfully reaching the young consumers they hope to addict,” said Birckmayer, who was not involved in the research.

WHO has estimated that the rate of female smokers worldwide will double by 2025, from about 9 percent in 2007. The current male smoking rate of about 40 percent has peaked and is slowly starting to decline. Increases among female smokers have been documented in a number of countries, including India, Singapore, the Ukraine and Russia, said Timothy O’Leary, a WHO spokesman in Geneva.

The gap among adolescent boys and girls who start smoking is also narrowing, with about 7 percent of girls lighting up compared to 12 percent of boys globally, according to WHO. And in about half of 151 countries surveyed in another study, roughly as many girls were smoking as boys, O’Leary said.

In some countries, tobacco sponsorship and advertising is rampant. Last month, an Indonesian cigarette company was forced to drop its sponsorship of former American Idol Kelly Clarkson’s concert in Jakarta following outrage from fans and tobaccocontrol groups. The pop star’s fan base is largely young women.

On Thursday, WHO called on countries to strengthen tobacco controls to protect young girls and women from exposure and addiction to tobacco, which kills an estimated 5 million people every year globally.

It said in China, home to the world’s most smokers, more than half of all women of childbearing age are forced to regularly breathe secondhand smoke. It kills some 600,000 people annually worldwide.

The survey was conducted in 14 countries in 2008-2009 with funding from the Bloomberg Initiative to Reduce Tobacco Use. Results will be announced later for China, India, Mexico, Poland, Russia, Turkey, Ukraine and Vietnam. The Philippines, Brazil and Egypt have already posted their results, but the CDC has not officially published the data.