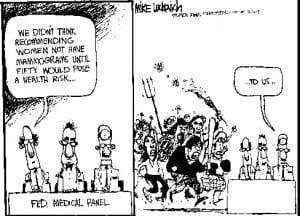 New guidelines by the American College of Obstetricians and Gynecologists say most women in their 20s can have a Pap smear every two years instead of annually to catch slow-growing cervical cancer.

The change comes amid a separate debate over when regular mammograms to detect breast cancer should begin, in the 40s or the 50s. The timing of the Pap guidelines is coincidence, said ACOG, which began reviewing its recommendations in late 2007 and just published the update in the journal Obstetrics & Gynecology.

While the two sets of recommendations are unrelated, they come at a time of intense debate over health-care reform. Mammograms in particular have drawn broad attention in Congress, reflecting a more than decade-long debate in the cancer community about how best to perform mammograms.

Republicans sought to connect the mammogram recommendations to the health-care overhaul, contending that such findings are the way that governmentdirected medical rationing starts.

But the Pap guidelines promise to be far less controversial as doctors for years have been told to perform fewer Paps among many women over 30, to cut back on unneeded care for the least at risk — and there’s growing understanding that over-treating younger women is an issue, too.

“The tradition of doing a Pap test every year has not been supported by recent scientific evidence,” said Dr. Alan Waxman of the University of New Mexico, who headed ACOG’s review.

— Routine Paps should start at age 21. Previously, ACOG had urged a first Pap either within three years of first sexual intercourse or at age 21.

— Women 30 and older should wait three years between Paps once they’ve had three consecutive clear tests. Other national guidelines have long recommended the three-year interval; ACOG had previously backed a two- to three-year wait.

— Higher-risk women, such as those with HIV, other immune-weakening conditions or previous cervical abnormalities, need more frequent screening.

Paps can spot pre-cancerous changes in the cervix in time to prevent invasive cancer, and widespread use has halved cervical cancer rates in the U.S. in recent decades.

Cervical cancer is caused by certain strains of the extremely common sexually transmitted virus called HPV, for human papillomavirus. There is a new HPV vaccine that should cut cervical cancer in the future; ACOG’s guidelines say for now vaccinated women should follow the same Pap guidelines as the unvaccinated.

But the updated guidelines reflect better understanding of HPV. Infection is high among sexually active teens and young adults. Women’s bodies very often fight off an HPV infection on their own without lasting harm, although it can take a year or two. The younger the woman, the more likely that HPV is going to be transient.

Moreover, ACOG cited studies showing no increased risk of cancer developing in women in their 20s if they extended Pap screening from every year to every two years.

As for adolescents, ACOG said cervical cancer in teens is rare — one or two cases per million 15- to 19-year-olds.