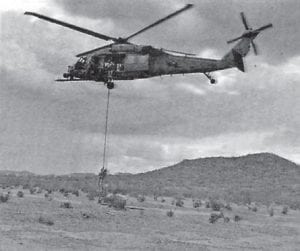 Airmen from the 205th Rescue Squadron set out in an HH-60 Pave Hawk helicopter for a training mission, when they were notified that a hiker was unconscious from a fall and needed help.

The aircrew flew back to base, offloaded their weapons, fueled up and picked up a Guardian Angel Team, special operators trained in trauma medicine and highangle rescue, and went to the hiker’s aid.

Earlier in the evening, operators with the Arizona Department of Safety tried to do a long-line rescue with their helicopter, but could not make it up the canyon as darkness was setting in.

Wearing night-vision goggles, the airmen of the 305th Rescue Squadron hoisted the 17-year-old hiker to safety. The initial report on the patient was a very severe head injury. He was not injured as badly as the report had indicated.

He was transported to a Life Flight helicopter in a landing zone about two miles from where he had initially fallen. The rescue team also hoisted up the civilian search and rescue personnel and returned to base.

In 1947 and 1948, at Langley Field, Va., I was a crew chief in my Air Sea Rescue Squadron. We had many missions on water and land to rescue personnel in downed aircrafts and boats off the coast of Virginia.