Rescue of students may bring new rules for trail 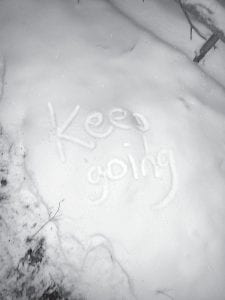 A lost student is believed to have left this note in the snow for rescuers on Pine Mountain. (Photo by Josh Bentley)

After what had become an annual college tradition nearly became a disaster, local rescuers and a Kentucky Nature Preserve official are looking at ways to decrease the probability of hikers getting lost on Pine Mountain — and for ways to improve rescue efforts for those who do.

Thirty-seven students and three staff members from LaSalle Uni- versity in Philadelphia were on their way to High Rock Thursday afternoon when they became disoriented and lost their way. One of the hikers used a cell phone to dial 9-1-1 at around 7:30 p.m. on March 7.

Josh Bentley, assistant chief of Mayking Volunteer Fire Department, said LaSalle students have visited Harlan County for community service projects during the college’s spring break for the last 37 years and it has become a tradition for the students to hike to the Bad Branch Falls and High Rock areas of Pine Mountain.

“They couldn’t find the trail they came in on,” said Bentley.

Kyle Napier, Kentucky Nature Preserve Southeast manager, said the Pennsylvania hikers are not the first ones to get lost on Pine Mountain. He said quite a few incidences of people getting lost have happened that were not reported and he is surprised that more hikers don’t get lost. 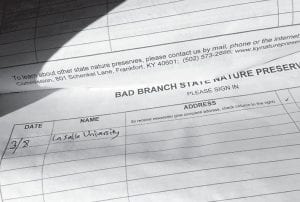 A sign-in sheet shows that a group from La Salle University entered the Bad Branch Nature Preserve on March 8, the day after they got lost and were rescued after becoming confused in the dark on Pine Mountain. (AP Photo/Dylan Lovan)

The LaSalle group initially was on its way to Bad Branch Falls, but decided to head to nearby High Rock instead.

The students didn’t start their trek on the seven-anda half-mile loop trail until after 2 p.m. A sign at the entrance instructs visitors not to start the hike after 10:30 a.m. during this season.

“They’ll get caught out after dark,” said Napier. “That’s why they shouldn’t start so late.”

Napier, who had hiked near High Rock earlier that day, said higher elevations had six inches of snow with trees covered with ice and snow.

“The conditions were absolutely terrible,” said Napier. “They shouldn’t have been out there. You’ve got to remember these are college kids. They see no fear.”

Napier said it took him at least two hours to warm up once he returned home from his hike.

Most of the hikers had on tennis shoes, thin jackets and sweatpants, said Bentley. Few had flashlights.

“ These kids were not dressed for the situation,” said Napier. “One of the big problems is they were cold and wet.”

“That gave us clues as to where they were,” said Bentley.

Kentucky State Police Sgt. Randy Surber and Trooper Michael Burton also wrote notes in the snow letting other rescuers know what time they had arrived at certain parts. Surber and Burton followed a trail through the snow for more than five hours and found the group near the top of Pine Mountain. Despite having built a fire to keep warm, several of the students still were suffering from hypothermia, said Miles. Members of the Mayking Fire Department, who were the next to reach the hikers, assisted the group in hiking down the mountain.

Members of Pine Mountain Search and Rescue eventually met the group on the High Rock loop trail. More rescuers from Pine Mountain Search and Rescue and community volunteers gathered at the top of the Cram Creek High Rock Trail. Phil Fugate III and five other community members who were operating all-terrain vehicles traveled about 400 feet to get injured hikers out of the woods. Those with the most serious injuries were transported by ambulance to the Whitesburg hospital. Injuries included sprained ankles and knee pain, said Bentley.

“One guy fell and had a laceration to the face,” said Bentley. One person who had a preexisting medical condition was hospitalized, he added, and half the group was dehydrated.

“They were hungry,” said Bentley. “They were wet.”

Paramedics and emergency medical technicians from Neon Fire and Rescue and Letcher Fire and Rescue treated patients at the scene. A Letcher County School District school bus staffed with emergency medical technicians from Sandlick, Neon and Pine Mountain Search and Rescue rode on the school bus with the rest of the group to the Whitesburg hospital. Patients arrived at the hospital around 4:30 a.m., where additional doctors and nurses from other hospitals were called in to help treat them.

Amanda Bentley, who lives in Mayking near where the hikers came out of the woods, made coffee and hot chocolate for the students and rescue workers. She said the college students were appreciative of the help they received.

Napier, the nature preserve manager, said he is contemplating suggesting to his superiors that the trails to Bad Branch Falls and High Rock be closed during poor weather conditions. He would block off the parking lot entrance with a chain or cable.

However, Shad Baker, president of the Pine Mountain Trail Conference, is against closing the preserve during bad weather conditions. Baker said some people enjoy wintertime backpacking across the top of Pine Mountain, adding that he’s had his photograph taken standing in 40-inch snowdrifts there.

“Things can be done to improve the situation, said Baker. “Bad Branch is one of the biggest tourist attractions in Letcher County.”

He said signs directing hikers will be modified soon to make then less confusing to newcomers.

“We will do what we can to make it not confusing,” he said. “I’m open to all suggestions.

Napier said no one had ever mentioned concerns to him about a confusing sign until he attended a Pine Mountain Search and Rescue meeting March 11 to listen to rescuers talk about how last week’s search went.

“The signage is fine as far as I am concerned,” he said. “You can’t make everything a yellow brick road.”

Napier added that the trail is well-marked with orange spray paint on trees.

“I think it is over blazed, but it is to help keep people from getting lost,” said Napier. “I don’t think the signage or blazing has anything to do with it.”

Miles said it is a real wilderness trail and no amount of signage is going to help.

“ You are still in the mountains,” said Miles. “You are still going to have to have some hiking experience. People get up there and get turned around. What would help out is if they would contact us when they realize they are lost instead of trying to find their way out.”

Miles has requested that he be contacted immediately after responders are notified by dispatchers of lost hikers on Pine Mountain so he can help with rescue efforts.

Napier and members of Pine Mountain Search and Rescue are going to travel all access points to High Rock and Bad Branch Falls so rescuers can familiarize themselves with the trail to be better prepared if another hiker becomes lost.

“It’s inevitable,” he said. “We’ll have more people get turned around.”

“Bad Branch gets a lot of visitors from all over the country,” said Napier.

According to the National Weather Service, temperatures in the Pine Mountain area dipped into the low 20s March 13. The high temperature on March 14 was in the mid-20s.