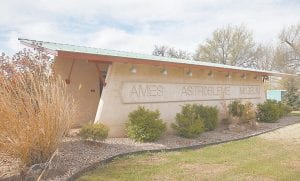 It packed so much energy that surface temperatures even 100 miles away rose 500 degrees in an instant. Here at ground zero, what remained was a crater eight miles across and a half-mile deep.

But no one had a clue about the event until one day in 1991. That’s when Rex Olson, an exploration manager for Continental Resources, was looking at a computer map that his team of geologists compiled from drilling and seismic data. He noticed in the Earth’s structure two miles beneath the surface a pattern that looked like “a cow track in the mud” like a giant hoofprint.

“He thought he had a glitch in the data,” said Harold Hamm, Continental’s chief executive.

Olson showed the map to Hamm and said, “You know, that kind of looks like an astrobleme.”

Hamm replied, “You’re kind of right, it does.”

An astrobleme, from Latin words meaning “star wound,” is pretty much that. Something from space, in this case, said Richard Donofrio, a meteor 1,000 feet across, slammed into this spot at 70,000 mph, scarring the Earth’s crust.

“It was quite larger than any nuclear blast could ever hope to produce,” said Donofrio, an astrogeologist who has studied impact craters.

The event was a secret for so long because it was buried under all the sediment and erosion that 450 million years can bring. By the time people arrived at ground zero and named it Ames, there were no visible hints of this deep past.

Back when the interstellar rock struck, this area was a shallow sea. As the object vaporized on impact, the crust opened in a classic crater shape, then rebounded in the center, leaving an uplift at the point of impact. Later, as the sea deposited layer after layer of sediment on top, other geologic forces caused the land to tilt, burying the crater on a slight slant.

“It is really quite a unique event or product of Mother Nature,” said Jack Stark, Continental’s senior vice president for exploration. “It’s equally unique that it was even found.”

Meteor impacts happened frequently, in geologic terms that is, with most of the larger ones occurring in the early part of Earth’s 4.5 billion-year history, Donofrio said. Almost all traces of such impacts have since disappeared, though. Rarely, however, people run across evidence of “impact structures,” often while searching for oil and gas.

A few impact sites discovered around the world have produced uranium and gold, others diamonds. Ames, one of 57 impact sites identified in North America, is one of 11 on the continent that produces oil and gas. With all the exploration here, Stark said, Ames also is “one of the most-studied astroblemes in the world.” The most definitive evidence that the “Ames Hole” was created by a meteor came from core samples containing shocked quartz. That material can be created only under “out-of-this-worldtype pressures,” Stark said. “It was really a good piece of work to be able to identify this was an astrobleme.”

For oil to then develop around such a crater, conditions have to be just right. Organic materials must be trapped there in a formation porous enough to allow for petroleum to form and then be recoverable. At Ames, that formation is shattered granite, rock that was thrown into the air and fell back into the hole, Stark said. “It was essentially rubble on the crater floor.”

The oil, pushed up by a water table, pooled at high points of the crater’s rim and central uplift against a layer of shale that sealed it from above. The treasure beneath Ames is obvious on a road north of town, where Stark points out producing wells above one edge of the buried crater. “We’re on the north end of what we call the ‘fertile crescent,’” he said.

So moved was Hamm by the crater’s discovery, he wanted the world to know about it. Today, the Ames Astrobleme Museum in the heart of the tiny town, across the street from American Legion Post 340, explains Ames’ violent and amazing past with charts, graphics and a short video. The open-air pavilion welcomes visitors from as far away as South Africa and Macedonia, who leave comments such as “Is weird!” and “Really, really cool!” in a guestbook.

As a geologist, Hamm said he is used to running across works of nature. But the Ames Hole was extreme nature, he said. “Supernatural.”

“I thought it was so remarkable, it was worth commemorating.”