Residents, businesses may be without water for days still 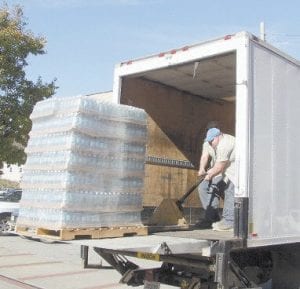 It still may be several days before public water in the Whitesburg area is deemed usable again.

The Letcher County Health Department declared a water emergency Sunday after an unintentional petroleum spill was discovered two miles above the Whitesburg water plant intake. Health department officials say the water is unsafe if used for anything besides flushing commodes. They are urging the use of bottled water for drinking and making ice.

On Tuesday, Whitesburg Mayor James Wiley Craft and Letcher Judge/Executive Jim Ward declared the areas served by the Whitesburg water system in a state of emergency and have asked the Kentucky National Guard to help with pumping fresh water to the city’s water filtration plant.

Craft said much remains to be done before the water can be declared safe to drink. He said water samples have been taken from above the source of the spill at Ermine. If the results of the test, which are expected to come back today (Wednesday), are suitable, Craft plans on laying three miles of waterline down to the water plant located near the Whitesburg hospital. Once the water is pumped, the city would begin flushing the water system.

“That will take several days to get the dirty water out of the system,” said Craft.

Craft said it is hard to say exactly how long it will take to get the city water system back to normal because of factors that remain unknown.

“We don’t know if the water sample will come back clean,” he said. “We don’t know how long it will take to get the National Guard here.” how long it would take to lay waterlines between Ermine and the hospital, pump water to the plant, or flush out the system.

“Everything is just kind of up in the air,” he said. “We have a plan in place and that is the most definite thing I can say.”

Craft said several customers complained Saturday of a gasoline odor in the water and state officials came in and conducted tests.

“It wasn’t significant at that point,” said Craft. “It happened again Sunday and officials started looking for the source and the water plant was shut down.”

The water plant was reopened Monday and is being maintained at two-thirds of capacity to allow people to flush toilets.

Craft could not estimate how much the water problem would cost the city or local businesses.

“There is absolutely no way to estimate the cost at this point,” said Craft. “We are going to have to change our filters at the water plant which will cost $26,000.”