Competitive shooters from Letcher County are confident a world-class sport and shooting resort park planned for Sandlick will increase tourism both here and in surrounding counties.

“It can’t help but succeed,” said Richard Smith of Letcher, a member of the Single Action Shooting Society. “We travel far and wide and spend a bunch of money to get to shoot. I want people to come here and do that.”

Officials on Thursday announced that Letcher County-based EKY Heritage Foundation Inc. has been awarded $3.5 million to build the first phase of the proposed Thunder Mountain Sport Shooting and Resort Park on abandoned mine land at Marlowe, near Whitesburg. 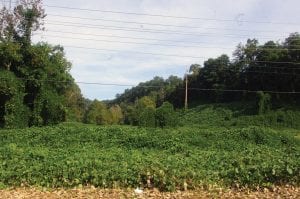 A kudzu-covered field (left) at Marlowe will become part of the Thunder Mountain Sport Shooting and Resort Park.

“We wanted to come up with an idea that didn’t compete or duplicate other local tourist attractions, but rather accentuate and highlight everything our region has to offer while staying true to our eastern Kentucky heritage,” Matthews said. “We want this to go beyond our county lines. We need to stop taking for granted everything this region has to offer and instead embrace it and promote it.”

Matthews spent her first couple of weeks as tourism commission chairman meeting with key stakeholders and members of the community who had already put a significant amount of time into tourism. Sport shooting and hunting kept coming up in general conversations. 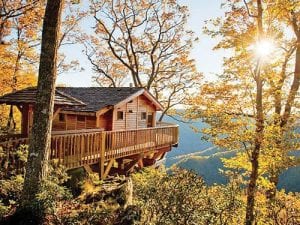 Pictured above is a “treehouse” rental similar to hillside cabins that will be offered for rent at Thunder Mountain.

“It is more common than we realize,” said Matthews. “It’s something we take for granted. Sport shooting is an equalizer, not dependent on age, gender or strength. It builds stamina and eye-hand coordination.”

Three of every 10 adults in the United States own guns, according to a 2017 Pew research study. The National Rifle Association has more than five million members.

Shortly after Matthews accepted the job of leading the tourism commission, Elwood Cornett, a member of the Letcher County Planning Commission, asked Matthews what she and her family enjoy doing when they travel outside of Letcher County. She said that other than sportsman clay shooting, everything they like to do could be found in Letcher County.

Matthews met with the tourism commission and asked each member to come up with “an idea that is bigger than us, one that we would have to win the lottery to afford, a dream we could shoot for.” In deciding on a project to rally behind, Matthews didn’t want a fad or something that would be dated, but rather a project that would require minimal maintenance and embrace the natural beauty of the mountains.

This is how the old Marlowe coal camp looked in the 1940s and 1950s. Portions of the old community will be used for the Thunder Mountain complex.

She said Thunder Mountain had the most potential and could be diversified into areas beyond shooting and archery. Matthews looked at photographs from different ranges and pulled out her favorite parts from each range.

The closest ranges in Kentucky are located at Lake Barkley State Resort Park in Cadiz and Rockcastle Shooting Center in Park City. Thunder Mountain will be the only sport shooting range east of I-75 and south of I-64.

“This range will be the nicest one times 1,000 compared to all the ranges we have visited,” said Matthews.

Thunder Mountain will have sport shooting and firing ranges for skeet, trap, rifle, pistol, sporting clays, five-stand, archery and 3D archery as well as casting ponds, an obstacle course and a paintball course. Plans include a campground, recreational vehicle hookups, a bathhouse and picnic areas. The facility will have space for hunter education classes, firearms instruction, practice space for school archery teams, 4-H clubs and certification qualification. Thunder Mountain will also serve as a training tool for local law enforcement.

Kentucky State Police Captain Jennifer Sandlin will give local troopers more options for training. Sandlin, who has charge of the six-county KSP Post 13 in Hazard, said local troopers have no access to a dedicated range but are able to shoot some in Knott County.

“Most of the troopers who work here live here,” said Sandlin. “Some people live in cities and don’t have property to shoot.”

Ranges will be completed before starting on the amenities, Matthews said.

The second phase of the project will consist of an outdoor amphitheater, open-air clubhouse and tree house rentals. “Combining an outdoor amphitheater and open-air clubhouse with sport shooting ranges will set the stage for national competitions which will draw thousands of competitors and spectators generating revenue in our region,” said Matthews. “Outdoor venues and ranges are both needed for sustainability.”

“I’m just thrilled to get the news that this is coming,” said Smith, a retired teacher who with his wife, Libby, has traveled as far as Albuquerque, N.M. to compete in “cowboy action” shooting events. Dressed in era-specific costumes, cowboy action competitors are judged on time and accuracy as they use a combination of handguns, rifles and shotguns to complete Old West themed courses. Without a shooting facility located nearby, the Smiths and four other marksmen travel once a month to Jackson County, located 100 miles from their home at Letcher, to shoot with the Hooten Old Town Regulators.

Smith, who soon will no longer have to travel outside Letcher County to hone his skills, is one of many local gun and archery enthusiasts pleased by the September 6 announcement.

Terry Taylor, owner of Isom Gun and Pawn, has been a member of the United States Practical Shooting Association for nearly 30 years. He travels to Ashland and Lexington to participate in shooting clubs. With the announcement of Thunder Mountain, Taylor is hopeful similar clubs will form in Letcher County.

Lila Stines, a seventh-grade archer at Fleming-Neon Middle School, said she’s excited to have the opportunity to have a place to practice in the offseason, her mother said.

“Right now, they only have a window of time after school that they can practice during archery season,” said Caroline Stines, Lila’s mother. “It’s hard for them to practice at home because of safety risks.”

Michael Sexton, archery coach at Letcher County Central High School, said with a variety of sports and events currently taking place in the high school gymnasium it is challenging to schedule archery tournaments at the school.

“A lot of times we have to travel to host tournaments,” said Sexton.

Archery has gained popularity among school-aged children in the past decade and every school in the Letcher County Public School District uses the National Archery in the Schools Program.

Sexton said archery students get tired of shooting at round targets and he wants to get involved with 3D archery, but the startup cost is delaying his efforts. Sexton is excited that Thunder Mountain will have 3D archery.

Jonathan Richardson, who leads the state’s archery coaches in wins, said archery is a sport students with different interests can enjoy. He said it also creates opportunity for college scholarships.

Thunder Mountain won’t be geared for gun and archery enthusiasts only.

“There’s plenty for everyone to do in nature without guns if that isn’t their cup of tea,” Matthews said.

Matthews believes the amphitheater could bring in large-scale concerts, conventions and festivals as well as a site for drama productions and church services. She envisions the property as a fairground that could also host events such as large car shows.

The clubhouse may also serve as an ideal setting for weddings, receptions, reunions, and company gatherings.

“A lot of companies go to Gatlinburg or Asheville for company retreats,” said Matthews. “We want them to come here for a unique experience.”

Treehouse cabin rentals are another favorite of Matthews that she discovered while traveling. Because of high maintenance and cost, the cabins won’t be built in trees. Ten cabins are proposed and will hang on the edge of the hillside and will be accessible from the backside of the cabin on solid ground. The treehouse cabins will be located at the highest point where the views are most spectacular, Matthews said.

Thunder Mountain is anticipated to create 40 to 50 jobs such as managers, range coordinators, instructors and maintenance personnel.

“The more successful it is, more jobs will be created,” said Matthews.

It is projected that the sport shooting and resort park will attract 40,000 visitors each year to Letcher and surrounding counties.

More people participate in target shooting than play tennis, soccer or baseball, according to the 2018 edition of Target Shooting in America. More than 20 million recreational shooters spent $16 billion on business and travel-related expenses in 2016.

Richard Smith said the town of Sparta, Ill. grew drastically after the World Shooting and Recreational Complex was built there.

“It’s amazing how that town took off,” he said.

“They will be shopping in our stores and staying in our bed and breakfasts,” said Adams. “It will bring outside money into Letcher County. Folks coming in will need places to stay in and around our area. This very well could spur on getting a hotel built in Letcher County.”

Thunder Mountain will revitalize land located on the former Marlowe coal site mined mostly by Elkhorn Jellico Company. The community of Marlowe had housing for coal miners, a school, churches, a tipple and a processing plant.

Since grant funding has now been awarded for Thunder Mountain, Matthews said EKY Heritage Foundation is in conversations with landowners to work out details for land acquisitions.

The grant is made up of six steps, with vetting being the first step. Matthews said she was told to expect it to take a year before funding is released. She expects construction to begin in spring 2021.

The $3.5 million in funding for the project is coming from the Abandoned Mine Lands (AML) Economic and Community Development Pilot Program.

“These grant announcements target the regional scope of SOAR and the importance of collaborating across county boundaries by highlighting the success we can create when we combine federal, state and local resources,” Rep. Rogers said of Thunder Mountain and the 19 other projects funded. “We are addressing a broad spectrum of issues through these grants, from advancing healthcare, to enhancing tourism, to improving infrastructure, to creating new jobs. If we are going to shape our future, we must continue to take a holistic approach.”