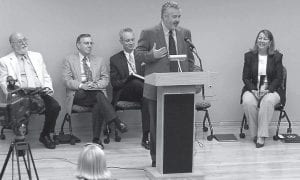 Officials from Southeast Kentucky Community and Technical College were joined by the CEOs of Appalachian Regional Healthcare hospitals in Hazard and Whitesburg Friday in announcing the expansion of its respiratory care program to the Whitesburg Campus.

Michael S. Good, M.S, RRT, coordinator, said the two-year curriculum, which leads to an associate of applied science degree, would be an expansion of the college’s respiratory care program in Pineville, which has been in operation since 1989.

Eighteen students will be admitted to the program that begins in August, and that number will double by the second year. Good said respiratory care is a selective admission program and applicants need to complete a general

education core before they

and Technical College respiratory care program, speaks about the expansion of the program to the

Whitesburg Campus. The program has been offered since 1989 at the Pineville Campus. with doctors to prevent, identify, and

treat acute or chronic dysfunction of the cardiopulmonary system.

Donnie Fields, CEO of Hazard ARH, who has been working with the college to bring the program to Whitesburg for three years, said there is a great demand for respiratory therapists at several ARH facilities. “We have needed this program for several years, and we thank the college for responding to the needs of the medical community,” Fields said.

Kathy Guyn, chair of the division of allied health at SKCTC, noted that the U.S. Bureau of Labor Statistics (BLS) lists respiratory care as among the fastest growing professions.

“BLS has noted that since 1998, the demand for respiratory therapists had increased by over 40 percent, and the demand is expected to continue to grow,” Guyn said. She said the increased demand had been driven in part by the large increase in the elderly population, the environmental impact on diseases such as asthma, and smoking.