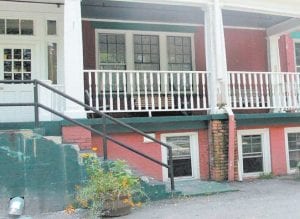 The report by Kentucky Protection & Advocacy includes these photos which (above) show the dilapidated condition in which the rest home was operating and (left) a shed in a picnic area in which some residents reportedly had sex.

Residents at Golden Years Rest Home lived in filthy conditions, suffered verbal abuse from staff and often lacked adequate food and hot water before it was shut down last year, according to a state agency report.

The personal care home, located in Jenkins, was closed in September and its former administrator convicted of theft and other charges. The investigative report dated Monday from Kentucky Protection & Advocacy found a long list of problems at the dilapidated facility, which was originally built by Consolidation Coal Company in 1915 to serve as a hospital. The state agency advocates for disabled individuals.

The home’s recent woes included felony charges against two top administrators and the 2007 death of a resident, Larry Bruce Huff, who wandered away from the home and froze to death. Huff ’s body was found later by the side of U.S. 23.

Residents at the facility told investigators from Kentucky Protection & Advocacy during a visit in 2010 that staff at the facility verbally abused residents, some residents had committed sexual abuse and several residents said they would like to live elsewhere. The state offi cials found a lack of food, hot water and dirty living conditions. 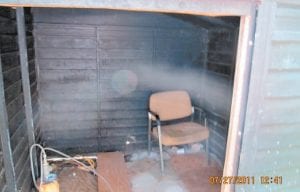 “The dining room smelled of raw sewage and was dark with little lighting,” the 27-page report said. “The furniture was stained and in disrepair and many beds had exposed mattresses which were old and stained.”

In one case of reported verbal abuse, the report said a staffer took a resident’s animal crackers, stomped on them, and cursed at her.

Marsha Hockensmith, Protection & Advocacy’s executive director, said the aging facility was often without toilet paper, and residents shared linens and washcloths. She said the majority of the residents at the facility had a mental health diagnosis or mental illness.

The Golden Years case “speaks volumes in terms of the value, or lack thereof, that we place on the lives of persons with disabilities, especially persons with mental illness,” Hockensmith said this week.

The home’s former administrator, James F. “Chum” Tackett, was accused of pocketing money that was supposed to be used for resident care. He pleaded guilty in November to theft, exploitation of a vulnerable adult and income tax fraud. Federal prosecutors said Tackett stole more than $92,000 out of nearly 400 federal checks between 2007 and 2009. He was sentenced in February to two years in prison for federal theft of social security funds charges and received 10 years probation for the state theft, exploitation and tax fraud charges.

Prosecutors said many residents had designated Tackett to manage their finances.

James Tackett’s grandson, Jonah, who was administrator at the home when it shut down, was indicted in July 2011 on charges of bribing a witness and tampering with a witness. He was later placed in a diversion program.

Golden Years Rest Home was closed on Sept. 30 and its 27 residents were placed in nursing homes or other personal care homes, the report said.

The full report including photos, released just before Mountain Eagle press time Tuesday, is available for viewing at no charge at www.themountaineagle.com.

Dylan Lovan is a reporter for The Associated Press.