Restaurant/bar to close, but may reopen in April 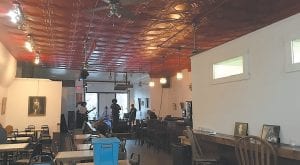 After nine years of operating as a restaurant, bar and concert venue that has attracted visitors from 41 states to Whitesburg’s Main Street, Summit City will close down later this week. However, the business could reopen in two months, owner Joel Beverly said this week.

Beverly announced the closing of Summit City on February 19, citing “regulations and constraints” that had “become too burdensome on a business like ours.”

The announcement came after officials with the Kentucky Department of Alcoholic Beverage Control ruled that Summit City would be fined $20,000 for violating the requirements of its alcohol license.

“We weren’t selling enough food and we had an issue with seats,” said Beverly, referring to the ABC’s finding that Summit City was in violation of a “limited restaurant license” that requires it to seat at least 100 patrons and earn 70 percent of its gross income from the sale of food.

On Monday, ABC officials in Frankfort gave Summit City a lifeline or sorts by agreeing to reduce the fine to $12,000, a figure Beverly referred to as “still very large.”

“We have kind of worked out a deal,” he said.

Beverly said plans are to shut down Summit City at midnight Friday (February 26) and keep it closed for the next two months while he works to pay the fine and determines the feasibility of reopening the business under a different alcohol license that would not include the current food and seating requirements.

He said he is also “looking at ways” to reopen the restaurant during nights on which concerts have already been booked.

Beverly said he would use some of the time the restaurant is closed to work with other restaurant and bar owners in asking the Whitesburg City Council to do away with an unpopular six-percent tax that is currently added onto every customer’s total bill whether or not the customer buys alcohol. The tax, which is in addition to the six-percent tax already charged by the state, and the food sales requirement make it nearly impossible to operate profitably in a county suffering from an extremely poor economy, said Beverly, who also owns and operates Apogee Environmental & Archaeological Inc., a permit compliance firm with offices in Whitesburg, Lexington and

News of the closing of Summit City, even if it’s just temporary, has been met with sadness by many, including some of the owners of other bars and restaurants in Whitesburg.

“ Very sad to hear the news of our neighbors at Summit City closing their doors,” StreetSide Grill & Bar owner Charlie Wright noted in a posting on the social media site Facebook. “Contrary to what a lot of people think, all of the downtown restaurants are very supportive of each other. Any business closing in downtown Whitesburg is not good for our town, but especially Summit City, which has brought in so many great bands and national acts to little ole Whitesburg.”

Added Wright: “Those shows alone bring in so many visitors from surrounding counties and states that would otherwise never have stopped in to our little town. A lot of those visitors return again and become repeat customers, not just for Summit City but also for any surrounding businesses. Those people have to buy food from our restaurants, shop in our stores, stay in our motels, and the list goes on and on.

“For an area that struggles to give out-of-towners a reason to visit, Summit City’s closing gives them one less reason and in turn will negatively affect our city. Let’s hope that they can find a way to keep their doors open and continue to be a great asset for downtown Whitesburg.”

“We need to find a way to keep that space open,” said Tyler Ward, who owns and operates The Thirsty Heifer in downtown Whitesburg. “We need Greg to keep

As its official name implies, Summit City Coffee was originally conceived as a coffee shop and restaurant where people of all ages could gather to talk or surf the Internet through a free Wi-Fi connection. (Summit City was the name of Whitesburg until 1843). While the first floor of the John A. Webb building was being remodeled into what is now Summit City Coffee, Whitesburg citizens voted overwhelmingly in April 2007 to approve a restaurant only alcohol sales referendum under which Summit City is still licensed. The voted marked the first time alcohol could be sold legally in Whitesburg since the town was voted dry in 1943.

When Summit City opened in late July 2007, a full house was on hand for a concert featuring folk musicians Si Kahn and Rich Kirby and two former members of the Eighties rock band Bang Tango of Las Angeles, Mark Knight and Mark Tremalgia, even though the restaurant did not yet have its license to sell alcohol. Encouraged by that turnout, Beverly and WMMT-FM programmer Greg Napier of Hazard brought rising southern rock star Jason Isbell to Summit City. It was again another sold-out show even though alcohol sales were not permitted.

After that initial appearance by Isbell, who would play in Whitesburg four more times before becoming the national star he is today (Isbell won two Grammy Awards earlier this month), Summit City became known for the quality of rock, country and alternative acts it was able to attract to such a small town.

Napier, who is responsible for booking most of the Summit City musical acts, this week remembered a conversation he had just recently with a central Kentucky man who had just learned of Summit City and its concerts.

“He said, ‘You all are doing more than Lexington is doing,’” Napier said.

According to records kept by Napier, music fans have traveled to Whitesburg from 41 states to see musical acts booked at Summit City during its nine years of operation. Most of the acts Napier has booked have also appeared on late-night television shows including the now-defunct “The David Letterman Show,” which featured 47 bands and solo musicians that also played at Summit City.

“Our acts have covered every late-night show and every major music festival from Bonaroo in Tennessee to Glastonbury in England to Lollapalooza and Riot Fest in Chicago,” said Napier.

Among the bookings of which Napier is most proud is one that occurred in May 2011 when three bands that appeared on the same night at Summit City — The Whigs, Sleeper Agent, and Company of Thieves — also appeared on Rolling Stone magazine’s list of the top 10 new bands to watch.

Napier also recalls that Summit City was the first venue located outside the state of Alabama that booked St. Paul & The Broken Bones, a southern rhythm and blues band that went on to open concerts for The Rolling Stones during that legendary band’s most recent tour of the U.S.

“Our bands have also opened for The Who and Kings of Leon,” Napier said.

Beverly contends that is Whitesburg is to continue to attract tourists from other states and regular visitors from neighboring counties, the City of Whitesburg is going to have to offer relief from the 12 percent tax (six percent state; six percent city) that Summit City and other Whitesburg restaurants that serve alcohol now have to charge their patrons.

“As a city we need to come together to protect businesses in town that make us distinct,” Beverly said. “No one travels to Whitesburg to visit Mc- Donald’s. They travel here to go to The Thirsty Heifer, StreetSide, Heritage Kitchen, Summit City, and Kentucky Mist Moonshine. These are the places that make Whitesburg distinct and a tourist destination.”

Ward believes that Summit City would not be in the situation it is now is had someone at the ABC stepped in and told the Whitesburg restaurant owners that they no longer needed to meet the burdensome requirements of a “limited restaurant” liquor license since Whitesburg residents voted to make the city fully “wet” instead of “moist” in 2011.

Ward said his restaurant, which opened in September, has also had complaints from customers upset about having to pay a 12 percent tax on food and drinks.

“When people get their bill they say, ‘Oh wow,’” Ward said.

Beverly said he is hopeful that eastern Kentucky businesses like his can get some regulatory relief from state officials in Frankfort now that Kentucky has a new governor.

“Hopefully with a probusiness governor in office, we can get more sensible alcohol laws that actually help small towns like ours instead of hurting them.”

Beverly also said he hopes members of the Whitesburg City Council will consider what Main Street would look like today if not for the restaurants that have opened since 2007.

“It was a ghost town before we all opened,” Beverly said.