Restaurant will have its own BBQ pit 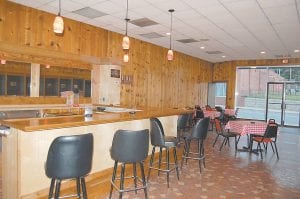 The former Quillen Drugstore of Whitesburg will be the home of Hillbillies BBQ. The restaurant, which is expected to open soon, will feature a menu of meats that are cooked slowly each day onsite. “There is nothing coming off of a truck precooked or anything like that,” said Charles Hall, one of the restaurant’s three owners. “Everything is cooked on a wood fire smoker or grill.”

Owners of a barbeque restaurant that will open soon in downtown Whitesburg pride themselves on homemade recipes and slow cooked meats.

“Everything we are doing is made fresh daily,” said Charles Hall, one of three founders of Hillbillies BBQ LLC. “There is nothing coming off of a truck precooked or anything like that. Everything is cooked on a wood fire smoker or grill.”

Meats will cook on the large commercial smoker for at least eight hours before served to customers.

“It’s stuff that’s got to cook slow,” said Hall. “We are truly a pit barbeque. It’s the real deal. There are no cutting corners. We are not boiling meat.”

Since the meat takes a whole workday to cook, owners of Hillbillies BBQ are still trying to determine how much meat will need to be cooked daily.

“We know how many pork sandwiches on average we can get out of a pork butt, but the question is how many pork butts are we going to have to smoke today to anticipate the lunch and dinner crowd,” said Hall. “If we had 100 people an hour eating in here all day long we’ll be able to handle it with the type of food production we are planning for.”

Hall, 40, said the business venture he is undertaking with Whitesburg residents Sammy Frazier, 37, and Jonathan Joseph, 30, is not just an idea they came up with recently.

“We’ve been kicking the idea around for a couple of years,” said Hall.

Frazier, a contractor who has been working in Whitesburg for about 18 years, Joseph, who has worked in banking, and Hall, a teacher in the Letcher County Public Schools System, decided to take their grilling skills to the next level.

The three men have cooked and completed other projects together as members of the Whitesburg Masonic Lodge and the Mountain Shrine Club. A dollar from every kid’s meal sold at the new restaurant will be donated to the Shriners Hospital for Children in Lexington.

To decide what items to include on the Hillbillies BBQ menu, Frazier, Hall and Joseph cooked meat and baked side dishes for family and friends to taste test at cookouts held at Hall’s residence.

“We’ve come up with our own recipes, barbeque sauce and rub,” said Hall. “Every bit of that is our own recipe. None of it is store bought or stocked.”

Their own signatures sauces — sweet, bourbon and hot and spicy — may eventually be available in stores. Once the necessary paperwork is completed, Hillbillies BBQ sauces will be sold in the restaurant. T-shirts and snacks will also be sold at the front counter inside the restaurant.

Homemade coleslaw, potato salad and baked beans passed the taste tests. Frazier’s wife, LaShawna, came up with the recipe for a banana split dessert and Hall’s wife, Brandee, has also had input in some of the desserts. The dessert menu will change often and may include peanut butter pie, banana pudding, chocolate, almond cake, Butterfinger pie and strawberry pineapple cheesecake.

The menu consists of about 14 different meat options including ribs, steak, chicken and even a smoked, blackened bologna sandwich.

“Our steaks, grilled chicken and burgers will be cooked on a wood fire grill,” said Hall. “The Boston butt, the ribs, the whole chickens and half chickens will be on a wood fire smoker. For somebody that is not a barbeque lover or if you can’t eat barbeque more than once a week, we have other items.”

Despite a shaky economy, the three men think their restaurant will fare well.

“That’s our two things that we are focusing on a great deal,” said Hall. “Just like for lunch, we are committed to trying to get the meal out fast. We know that and that is why we want to keep enough workers to get the food out.”

The restaurant is located on Main Street in the old Quillen Drug building, which was most recently Hobo’s Diner. Within the last month, the space has been transformed from a diner style setting into a restaurant with an enclosed kitchen. Frazier custom built a large salad bar and a beverage bar. Old historic photos of Letcher County line one of the large walls in the dining area.

Of the many decisions Frazier, Hall and Joseph have made in trying to get their restaurant started, the easiest was picking the name.

“We put three names in a hat, shook it up and drew one out,” said Frazier.

Slips of paper with CJ’s and Poor Boys written on them didn’t get chosen. Hall said the name doesn’t mean the owners are trying to portray a negative image.

“We’ve all dealt with the stereotype of hillbillies,” he said. “We’re not trying to portray that or embellish that. We are trying to be the opposite. We are proud of our mountain heritage. We want to show folks there is another side of that.”

Hall wants people to be proud of living in a mountain town. … People will come here and see it is not about stereotyping and we are taking pride in our recipes.”

Frazier wants the brand name to end up in a big city.

“I think all of our main goal is to have a Hillbillies BBQ in a city one of these days,” said Frazier. “ It would tickle me to death. I’d like to have one in New York City.”

According to their business plan, if the restaurant is doing well one year from now, they will begin planning to open a restaurant in a second location.

“If we can make it in this economy for a year I think it will work,” he said.

Hall said the restaurant has no plans to host live music or to be a sports bar.

“They’ve got their niche and we have ours,” said Hall.

Frazier hopes the new restaurant encourages people to stay home and dine in Letcher County and spend their money here.

“If they stay in town, it is better for the town,” he said.

The owners also hope people who live in surrounding counties will travel to Whitesburg to eat their barbeque.

“Hopefully people will appreciate what we are trying to do about revitalizing downtown and giving them a good place to eat and make memories,” said Hall.

Once the restaurant opens in August, one of the three owners will most always be there. Joseph quit banking to be the daytime manager. Frazier and Hall will take turns working in the evenings.

“We are planning to be here for as long as we can make a living out of it,” said Hall.

So far 20 people have been interviewed for jobs at the restaurant.

Parking is located in front of the restaurant on Main Street and in the free parking lot at the end of the street. Parking is also available behind the restaurant and patrons can enter from the back of the 100-person-capacity restaurant.

Curious community members have recently opened the restaurant doors during the renovations to see what it looks like.

A full menu is available for viewing at www.hillbilliesbbq.com.