Restaurants doing their ‘best’ to stay afloat under new rules

Accepting ‘to go’ orders only 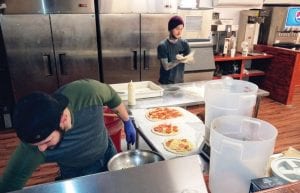 Dakota Krahenbuhl, manager of Dawahare’s 109 (left), added toppings to pizza as Cody Caudill worked on crust behind him. Krahenbuhl said the restaurant had a run on pizzas Tuesday after the governor ordered restaurants and bars to halt dine-in service because of the COVID-19 virus. (Photo by Sam Adams)

Chairs were turned upside down in Heritage Kitchen, and owner Brad Shepherd was on foot, delivering lunches in downtown Whitesburg.

One day after Gov. Andy Beshear ordered restaurants and bars closed to prevent the spread of COVID-19, business owners were trying to assess the impact to their businesses and their employees.

Shepherd said the verbal announcement at 9 a.m. Monday that restaurants would be ordered to close came as a shock.

“I would say our business is 60 percent down right now,” Shepherd said.

Shepherd’s restaurant, Heritage Kitchen, is just reaching the five-year mark, and he said it was finally beginning to show a profit.

“This might help me on the taxes, but it’s going to hurt me every other way,” he said. “I’m going to laugh about it and do the best I can, and cry about it when I get home.”

The business is accepting phone-in and online orders, and is allowing customers to pick up their order at the counter or at the curb, and employees are delivering in the downtown area.

Next door, Dawahare’s 109 manager Dakota Krahenbuhl rushed from the prep table to the ovens and instructed a helper on measurements for making pizza dough while he talked to a reporter. He said so far, the measure has increased business, but it’s only the first day of the closure order.

“It very much ramps up our delivery,” he said, placing pepperoni and sausage on several pizzas at once. “It seems like anybody still working is calling.”

Missy Matthews, chief executive officer of Childers Oil, which owns seven restaurants and gas station/diners in Letcher County alone, said all of those places are serving food for carryout and curbside service, but all dining rooms are closed. Employees have a list of cleaning chores that must be done hourly from credit card terminals to gas pump nozzles.

Pine Mountain Grill is delivering to customers within the city and “within reason,” and to older customers who eat at the restaurant.

“One of our big concerns is seniors. We have seniors who eat here every day, multiple times a day,” Matthews said. “We know where these people are going to sit, what they’re going to order, and what time they’re coming through that door. It’s been a big burden on our minds.”

Gov. Beshear urged people to order take out whenever possible and support local businesses and their employees.

“We are to the point now where this is a step we have to take. I want to thank everyone that stepped up and did this voluntarily,” he said. “We are asking so many people to make sacrifices. It is not lost on me that most of these are small businesses. We are going to do everything we can to be there for you. We realize the impact this will have and we will be there for you.”

Matthews, who is also tourism director for the county, amplified Beshear’s call to shop local.

“I’d like to challenge people to think about their breakfast, lunch and dinner choices and go to a different local restaurant every time they eat out,” she said, adding that people can make a list and help keep another local eatery from going out of business. She said people can also make a list of places to go where there are no crowds to contend with — hiking at Bad Branch Falls or Pine Mountain Trail, or just taking a laptop to the top of Pine Mountain and working from a place with a view other than four walls.

“One of the things we have to our advantage is that we have places we can go to get out of the house and still be safe,” she said.

With Letcher County struggling economically and attempting to jumpstart a tourism industry, the virus could hardly have struck at a worse time, however Whitesburg Mayor James W. Craft — in whose city most of the restaurants and bars are located — said, “It is imperative that we all adhere to current government advice and adjust our social interactions accordingly.

“Our area has been presented with many challenges before, but as long as we work together we will make it through this — just as we always have before,” Craft said.

He said he hadn’t paid attention to how severe the complications from COVID-19 can be until he watched television coverage of surviving patients, including one woman who had a fever so high that she hallucinated for two days. “She said it was h-e-l-l,” Craft said.

Craft said it’s going to be hard for people to focus on how bad the virus can be and all the steps needed to take to keep it from spreading until it hits locally. “And I hope that doesn’t happen,” he said.