Restless legs can destroy your sleep 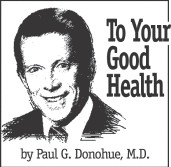 DEAR DR. DONOHUE: I have suffered with restless leg syndrome for 25 years. What causes it? Is there a cure? I do take Requip. Some say that having the veins in your legs stripped helps. Does it? — C.K.

ANSWER: Stabbing pain, a burning feeling and a creepy-crawly sensation in the legs are some of the ways people describe restless leg syndrome. The sensation mostly comes on in the evening when sitting in a chair or, more often upon going to bed. The night is punctuated with interruptions of sleep, as the sensations wake a person. They drive the person to get up and walk about until these annoying feelings go way. Walking does get rid of them, but the respite is only temporary. The attacks reach peaks at midnight and again around 4 a.m.

For most, a cause cannot be found. Sometimes it’s a family affair, passed by the parent to the children. In a few instances, iron defi- ciency anemia, renal failure and Parkinson’s disease are associated with it. The anemia connection is worth checking out, since it has a definite cure — iron tablets.

The medicine you mention, Requip (ropinirole) is one often prescribed for this problem. If you’ve been taking it for some time without relief, you ought to try some of the other medicines used for it. Mirapex (pramipexole) and Neurontin (gabapentin) are two others. A new variety of gabapentin called Horizant comes as an extendedrelease tablet, so medication is delivered to the body throughout the night.

A warm bath before going to bed, coupled with a leg massage afterward, often can cut down on the number of attacks and their intensity. Restricting alcohol and caffeine works for some people. Removing leg veins will not help.

The booklet on restless leg syndrome and nighttime leg cramps goes into greater detail on both these subjects. Readers can obtain a copy by writing: Dr. Donohue — No. 306W, Box 536475, Orlando, FL 32853- 6475. Enclose a check or money order (no cash) for $4.75 with the recipient’s printed name and address.

DEAR DR. DONOHUE: My mother has lived in an assisted-living facility for two years. She’s mentally clear, but physically unable to take care of herself. The last time I visited her, a nurse was taking her blood pressure. She told me that my mother’s pressure in her right arm was normal, but the pressure in her left arm was 165 over 95. Which is her true blood pressure? — E.L.

ANSWER: A 10-point discrepancy in blood pressure between the two arms is considered acceptable. With a larger difference, the actual blood pressure is the higher one.

DEAR DR. DONOHUE: How does pancreatitis relate to cancer of the pancreas? Is it an early stage of that cancer? — D.B.

ANSWER: Pancreatitis is an inflammation of the pancreas brought on by many different conditions, including viral infections. Pancreatitis is not an early stage of cancer.

Chronic pancreatitis, a long duration of pancreas inflammation, is a slight risk for eventual development of pancreatic cancer, but even it is not a common prelude to cancer.