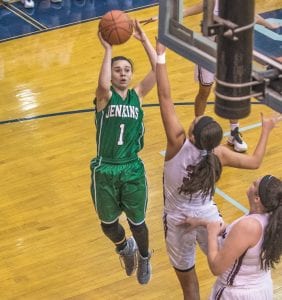 The Jenkins Cavaliers boys’ and girls’ basketball teams fell in the opening round of their respective tournaments in the 59th District this week.

Meanwhile, both the Letcher Central boys’ and girls’ teams are assured of playing through at the least the first round of the 14th Region next week after both teams advanced to the final game of the two 53rd District tourneys now underway.

Jenkins sophomore guard Jerrica Thacker (left) and her teammates fell to Pikeville, 88 to 51. The boys lost to Shelby Valley, 87 to 36.

The LCC boys beat Cordia, 78 to 74 Monday, to advance to the district final at home against Knott Central (Feb. 20).

The LCC girls beat June Buchanan, 68 to 24, to advance to the district final Thursday night, also against Knott Central.