Resurgent Wildcats off to races 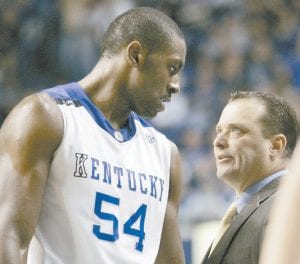 Kentucky coach Billy Gillispie had a word for Patrick Patterson (54) after pulling him in the second half of UK’s NCAA college basketball game against Central Michigan in Lexington on Monday. Patterson had 15 points and nine rebounds in the 84-52 Kentucky win. (AP Photo/Ed Reinke)

Jodie Meeks sat in a chair, hands resting on his knees. He had just scored 32 points in Kentucky’s 102-58 rout of Tennessee State last week when a voice floated in from down the hallway.

Meeks turned and caught teammate A.J. Stewart trying — unsuccessfully — to duck out of sight after the Dec. 22 game. The junior guard let out a little laugh and just shook his head, enjoying the moment.

For Meeks, and his suddenly red-hot team, things are looking good.

Kentucky (11-3) has won 11 of 12 after season-opening losses to Virginia Military Institute and No. 1 North Carolina. It is playing with the kind of confidence and fire not seen since Rick Pitino stalked the sidelines a decade ago.

After Monday’s 84-52 win over Central Michigan, the Wildcats are averaging 81.1 points — the most since Pitino’s last team in 1996-97 — and have already scored at least 88 points six times this year, a number it hit just seven times combined in the four previous seasons.

It helps having a healthy roster — namely Meeks, who is scoring 24.1 points a game after missing most of his sophomore season with a variety of maladies. There is also a renewed sense of belief in each other and in the exacting ways of their perfectionist coach.

“Last year was just so hard not only with me being injured but just the whole team being injured,” Meeks said. “I think this year, we have a better record and it’s a better mood.”

These Wildcats hardly resemble the slightly dysfunctional, injury-ravaged mess they were this time last winter.

Kentucky limped into Christmas with a 5-5 record a year ago, a mark that included losses to Gardner-Webb, UAB and Houston and had the program’s demanding fan base wondering if first-year coach Billy Gillispie was up to the job.

It wasn’t pretty, but it was enough to survive a tumultuous season at the home of college basketball’s all-time winningest program.

Gillispie promised better days and continued his overhaul by bringing in 11 new players as the roster swelled to 20. Finding the right pieces to put in the right places has led to a bumpy transition, and when the Wildcats lost their home opener to VMI it felt like Gardner-Webb all again.

Except this time, rather than sulk through a battle of wills with their coach as they did last year, the Wildcats simply went back to work.

While Kentucky is averaging nearly 20 turnovers a game, there seems to be a growing sense of cohesion as Gillispie tinkers with his lineup.

The miscues have steadily declined since the Wildcats gave the ball away 31 times in a 74- 72 win over Kansas State in Las Vegas last month. The offense has played with an energy it lacked for long stretches a year ago.

“I think they’re learning to play hard, play smart and play together,” said Gillispie, repeating the mantra that’s at the core of his coaching beliefs.

The evidence game during one flawlessly executed possession against Tennessee State. The Wildcats had already reeled off the game’s first 13 points when guard Kevin Galloway dribbled along the wing and then dropped the ball inside to Patterson.

Patterson took one dribble and waited for the double team, then kicked out to Michael Porter at the point. Porter shoveled the ball to Meeks, who passed up a contested 3-pointer and found Darius Miller in the corner. Miller pump faked and drove the baseline before hitting Galloway coming down the lane. Galloway collected the ball, drew the defense and then hit an open Patterson for a layup.

It was the kind of play the players admit might not have happened seven weeks ago when the Wildcats looked like five guys going in five directions.

“Sometimes you forget that you need to move to help your teammates out,” Porter said. “It just shows how unselfish we are and how well we play together.”

Particularly when they’re playing fast. Gillispie has taken the training wheels off his offense. His orders to his players are simple: “Go.”

He adds: “I think we’re playing too slow to be honest with you.”

“He wants perfection out there,” Patterson said.

This, after all, is a coach who is only half-joking when he says he’d like to shut out an opponent. Patterson said that goal is one reason the Wildcats have come so far, so fast.

“I do keep that dream alive,” he said. “I do see the light at the end of the tunnel. I just feel that that day will eventually come.”