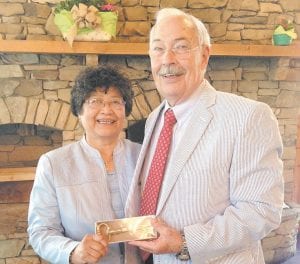 Angelina “Lina” R. Tidal, former director of the Letcher County Library District, was surprised to receive a key to the City of Whitesburg from Mayor James W. Craft on April 16 during a retirement luncheon hosted by the library board at Pine Mountain Grill. Tidal was a library volunteer for three years prior to being hired as a head librarian. She was named district director in 1990 and retired earlier this year. Under Tidal’s leadership the Harry M. Caudill Memorial Library in Whitesburg, the Jenkins Public Library and the Fleming-Neon Public Library were constructed. More than 60 computers are available for patron use in the Blackey, Fleming- Neon, Jenkins and Whitesburg libraries.