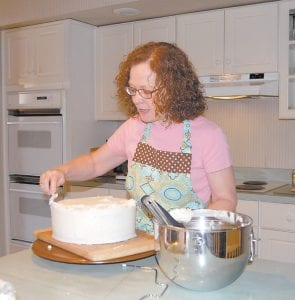 Since retiring from her job as school teacher, Bonnie Adams has been perfecting her hobby of baking cakes and decorating them with fondant icing. Here, Adams works on a cake in the kitchen of the Letcher home she shares with her husband, Martin. (Photo by Sally Barto)

Bonnie Adams’s hobby of decorating elaborate fondant cakes is gaining popularity as more people in the county see her creations at birthday parties and other events.

“People enjoy the cakes more so than I expected,” said Adams. “I’m really amazed at how busy I am and the number of people I turn down to keep the numbers down.”

Adams, who taught middle school math at Letcher Elementary School for the majority of her 28 years in education, began experimenting with cake decorating after she retired two years ago. After perfecting her craft on cakes for family members, close friends and some former students, the demand for Adams’s creations has grown to the point she no longer can tell everyone yes.

“I hate telling people no,” Adams said one day recently while taking a short break from working to fill three requests for theme cakes. “I try to really keep the numbers down because I work really slow and I enjoy being able to take my time.” 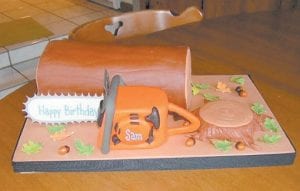 Bonnie Adams created this design for a fondant cake after visiting Breeding’s Plumbing and Electric to take photographs of the chainsaws the store sells.

Adams lives with her husband, Martin, in the community of Letcher. The couple’s kitchen table was crowded last Friday with a colorful, two-tiered cake adorned with characters from Nickelodeon’s hit television show “Yo Gabba Gabba.” The small “suntanned” people, beach balls and floats used to decorate the cake were sculpted by Adams from fondant rolls she had prepared. Also on the table was a deer head made of cereal treats and covered with fondant.

Adams said taking her time to focus on fine details is her favorite part of cake decorating. If she isn’t pleased with how something looks on the cake, she will tear it up and start over, her husband said.

“I think she is really good at it and takes pride in her work,” said Martin Adams.

Mrs. Adams said she wants her creations to appear as authentic as possible.

“It’s all about the details,” she said. “On my own little scale, I am usually pleased with my product.” 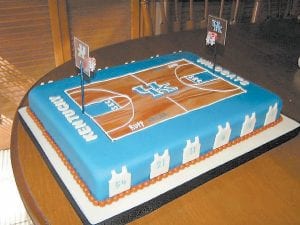 Fondant rolled to resemble the University of Kentucky’s basketball court is the most popular of the cakes Bonnie Adams has decorated so far.

Adams does not make sheet cakes because she said they don’t look as cute as tiered cakes. The rolled fondant she uses to decorate is made of powdered sugar, marshmallows and water.

Fondant “is the most wonderful stuff in the world,” she said. “You can do so much with it. It makes a beautiful cake that you can’t make any other way.”

Since leaving the school system, Adams has attended two cake decorating classes under Nicholas Lodge at The International Sugar Art Collection School of Sugar Art in Norcross, Georgia. During one class she learned the basics of using fondant and in another class she learned how to make sugar flowers.

Adams traveled to Savannah in February to attend a class taught by Ashlee Perkins, who has appeared on cake challenge television shows on Food Network and TLC. She learned to use PVC pipe and other materials to make a structure around which to build a monster cake. Adams said the cake she learned how to make sells for $650 at some bakeries. 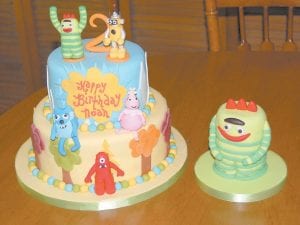 This colorful, two-tiered cake is based on Nickelodeon’s hit television show, “Yo Gabba Gabba.” Bonnie Adams made the characters from rolled fondant. (Photo by Sally Barto)

Adams enjoys the challenge of making a character cake after telling someone she can do it. She is now able to sculpt a cake that looks just like Lightning McQueen, the animated racecar that was the central character in the Disney/ Pixar movie “Cars.”

The Lightning McQueen cake Adams made for Trey and Cathy Narramore’s son, Breyden, was a hit with their family.

“We loved it,” said Trey Narramore of Mayking. “It not only looked awesome but it tasted awesome as well.”

After visiting Breeding’s Plumbing and Electric in Isom to make photographs of chainsaws, Adams was able to decorate a cake that looked like a log being sawed. The saw was made of cereal treats covered in fondant, while the log was the cake itself.

Last December, Adams made a cake that looked similar to a “Gone with the Wind” music box. The round-shaped cake even played “Tara’s Theme”. 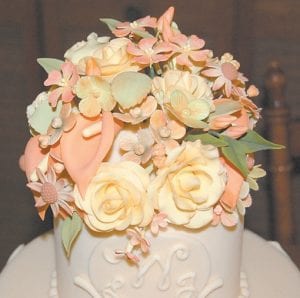 Handmade sugar flowers decorate the top of a three-tiered wedding cake which earned Adams a blue ribbon at the Kentucky State Fair.

According to Adams, one of the most challenging cakes she has made was a fierce dragon cake for her granddaughter, Alexandra. She sculpted a large, orange dragon from gum paste and draped it around a gray castle.

“I really worked on that a long time,” she said.

Adams has even made an armadillo shaped bridegroom’s cake as well as several dinosaur cakes, summer-themed cakes and cartoon character cakes. She has sculpted figures to look like SpongeBob Squarepants, Nemo, the Backyardigans and the Smurfs.

Of all the cakes Adams has created, her favorites involve pink, girlie-themed cakes and bows. Her most popular cake is a University of Kentucky basketball cake, which she has made four times. The icing is made of different shades of brown fondant, which Adams twists and rolls to look like a wood grain basketball court. 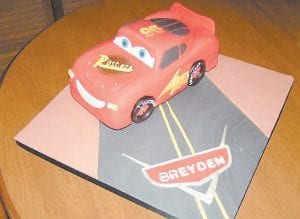 “It was kind of a disaster,” said Adams, who is her toughest critic. “It looked like the Leaning Tower of Pisa.”

She has since made a wedding cake for one of her other daughters. With practice and experience, Adams continues to make impressive looking cakes.

“Once you do something, it gets easier,” said Adams.

Last August, Adams entered two of her decorated cakes at the Kentucky State Fair and won Rookie of the Year in the culinary division. She won a blue ribbon for a three-tiered wedding cake topped with handmade sugar flowers and a red ribbon for a circus-themed birthday cake. 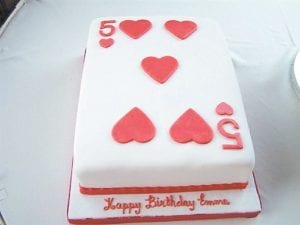 A birthday cake decorated with the five of hearts.

“There is a demand for it because these cake shows have created an interest,” she said. “Cake shows have brought cakes to people’s attention.”

Adams has even been compared to Buddy Valastro, owner of Carlo’s Bakery in Hoboken, N.J., and star of the hit TLC show, “Cake Boss”.

“Bonnie is always really humble and says she doesn’t think so when I tell her she is as good as the Cake Boss,” said Debbie Campbell, Adams’s sister-in-law. “Bonnie’s cakes are absolutely amazing. They are not only works of art, but they are also delicious. She worked to find and develop a fondant recipe that actually tastes good. I always think her fondant tastes like having extra candy with a cake.”

Adams encourages people who enjoy decorating cakes to pursue it as a career, but says she is happy to keep it as only a hobby for herself.

“It’s not a business, it’s a hobby,” she said. “It’s just entertainment. It has been a wonderful hobby. When you retire you really need something to do. I really enjoy doing it. I wouldn’t do it if I didn’t like doing it.”