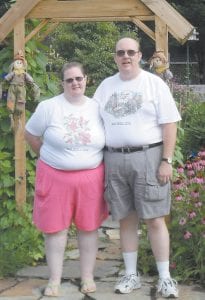 At left, Paul David Sturgill and his wife, Adrienne, are seen before they joined Weight Watchers. The results of their hard work and determination to get healthy can be seen in the photo above.

Paul David Sturgill, 48, of Cromona, was told by his doctor in September 2011 that he needed to lose weight after he developed high blood pressure.

In October, his wife Adrienne asked Sturgill if he would join Weight Watchers with her. The Sturgills attended their first Weight Watchers meeting at First Baptist Church in Whitesburg on Oct. 3, 2011. Sturgill weighed in at 301.4 pounds and set a goal to lose 100 pounds.

“Some of my former students will see me out and say they don’t recognize me. Some were amazed at how much I lost,” said Paul Sturgill, who taught science and video production for 27 years in the Letcher County School System.

Based on height, weight and sex, Sturgill was allotted 54 points he could use a day. Points are assigned to food items by calculating fats, carbohydrates, protein and fiber. 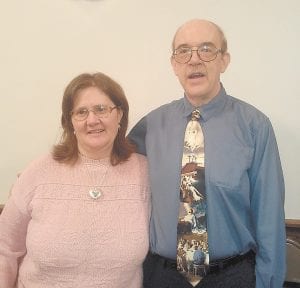 “If there is a way to do it, this is the way to do it,” said Sturgill, who taught 19 years at Fleming-Neon High School and eight at Letcher County Central High School. “I love the idea with the Weight Watcher plan. I could still eat whatever I wanted to eat.”

The Sturgills succeeded by changing the way they ate. Food portions became smaller. Snacks were cut out. Some items were exchanged for healthier options. White bread was replaced with whole grain 40-calorie bread.

“We looked at what we were cooking and started looking at what we buy,” said Sturgill. “We try to make sure things are acceptable points.”

He tries to save points wherever he can. One slice of white bread is two points where as one slice of whole grain 40-calorie bread counts for one point. Instead of regular potato chips, they eat Special K chips.

In an effort to save points, Sturgill recently took his own hot dog wieners to a cookout. The extralean wieners cost a little more, but only count as one point, he said.

Sturgill pays attention to how much meat is on a sandwich and knows that condiments can rack up the points.

“Using fat-free products will cut down points,” he said. “Fruits and vegetables are free. Water makes it great. We drink water with no calorie flavoring.”

“As you lose weight, your points go down,” Sturgill added.

To cut down on his sodium intake, Sturgill stopped drinking soft drinks. Instead of recycling aluminum cans, the Sturgills now recycle plastic water bottles. The couple still eat at restaurants two to three times a week.

“We try to order healthier things,” said Sturgill. “I’ll cut my steak in half. Are you eating one portion or four portions when you go to a restaurant? Pay attention. Focus on what it is.”

One of Sturgill’s favorite meals to eat at a local restaurant is a super quesadilla with steak and chicken, which totals about 18 points. He cuts it in half and takes the leftovers home. Twelve tortilla chips add up to four points. Salsa is zero points. One cup of cheese sauce is eight points.

“We’d go in there and eat almost two baskets before the meal and we loved cheese sauce,” said Sturgill. “I’ll count out 15 chips. Once I eat that up, I won’t go back into the basket.”

A key to the program is “getting the discipline down,” he said.

The Sturgills enjoy sweets and have learned to incorporate fruits in dessert.

“I still have to have a piece of chocolate every now and then,” he said.

The Sturgills renewed their wedding vows Saturday to celebrate their 25th wedding anniversary. Sturgill saved up extra points by exercising so he could eat cake and still reach his week’s weight goal.

He uses a Weight Watchers app on his smartphone to help keep track of his daily points and his progress.

“Those are nice to have and see evidence that something worked,” said Sturgill.

With the Weight Watchers 360 program, Sturgill can earn points by exercising.

“Mowing the lawn is six extra points,” he said.

As a member of Neon First Church of God, Sturgill plays softballs on Saturday nights. He also exercises with programs made for the Nintendo Wii gaming system.

He reached one of his goals of completing a 5k. He has also hiked to Bad Branch Falls.

“I’ve got the energy to get up and go and do things,” said Sturgill.

As much as Sturgill relies on the app, he says attending meetings with other participants in the program is important.

“I like the idea of going there,” he said. “You have an official weigh in. It’s accountability. You have people there who can encourage you. We share recipes and ideas.”

The group consistently has about 10 to 15 people who attend meetings, with about 30 showing up at the beginning of each year.

As an incentive for making progress with the Weight Watchers program, Sturgill was given a key ring of success. He was given charms for losing 10 percent of his weight, attending meetings for 16 weeks, losing 50 pounds, losing 75 pounds, losing 100 pounds, exercising and reaching his goal.

If Sturgill maintains his goal weight for six weeks, he will become a lifetime member of Weight Watchers and his membership will be free.

He pays a monthly fee of $42.95 to use the Weight Watchers digital tools and attend the meetings. If a member pays just to attend meetings, the cost is $13 per week.

“If they can afford to come and do Weight Watchers on a regular basis, they will lose the weight,” said Sturgill. “No doubt.”

Sturgill lost about five pounds his first week, but had some weeks where he gained weight. He encourages people not to get discouraged.

“You’re going to have good weeks and bad weeks,” he said. “I have had weeks where I have gained four pounds and you have to stop and think what you did that week.”

Sturgill is considering working for Weight Watchers as a receptionist for the Whitesburg chapter to take care of paperwork and sell products.

As the lone man of the Whitesburg chapter of Weight Watchers, he would eventually like to be a leader and start a men’s group.

Sturgill, who is on low doses of blood pressure medicine, doesn’t intend on losing much more weight. He is content with weighing 200 pounds, even though some have told him he is getting to be too skinny.

“I guess my body wasn’t a typical body,” said Sturgill. “I didn’t have a huge belly sticking out. I guess my weight was spread out.”

Sturgill is the first person to lose 100 pounds through Weight Watchers since Karen Burns became the chapter leader three years ago. Burns describes Sturgill as very uplifting and inspirational.

“ He did a complete turnaround,” said Burns. “He has been very dedicated. His whole lifestyle has changed.”

Burns said Weight Watchers is not a quick fix.

“It’s a lifestyle change,” said Burns. “You didn’t put it on overnight. You can’t take it off overnight.”