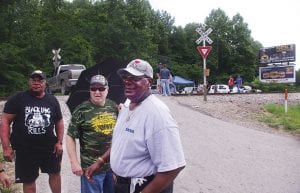 SHOW OF SUPPORT — George Massey, from left, Stanley Sturgill and Bennie Massy look on as a car horn is sounded in support of Blackjewel miners blocking a rail crossing at Cumberland. The three were among the retired UMWA miners who turned out to support Blackjewel miners on Tuesday. (Photo by Sam Adams)

Blackjewel Mining employees, still unpaid for their last month of work, raised the ante this week, blocking a train carrying coal from the bankrupt company’s Cloverlick No. 3 Mine in Harlan County.

Miners flooded the tracks Monday afternoon, camped out on them Monday night and were still there Tuesday, playing cornhole on boards set up between the steel rails.

“I’ve been here since 2 p.m., and I’ve yet to go to sleep,” miner Blake Watts of Cumberland said about noon Tuesday.

Miners started their picket line at Slope, near where the bankrupt company has its No. 3 Mine and tipple, and where the company was loading coal to ship out.

“We held them up for about an hour and 15 minutes from loading it,” said Chris Lewis of Gordon as he and others stood on the tracks, passing time until the company attempted to send the train out again.

Dalton Lewis of Cumberland said Kentucky State Police told the miners they had to move from the tracks at the tipple. He said police were polite, but made clear that that they had to move or face the consequences. 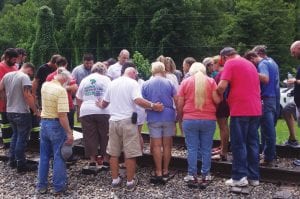 PRAYING FOR RELIEF — Members of the First Baptist Church in Westminster, S.C., joined Blackjewel miners in prayer Tuesday as the miners blocked the railroad tracks to prevent the bankrupt company from shipping coal from its mine at Cloverlick. (Photos by Sam Adams)

“They’ve kicked us off and they did tell us it was a federal felony,” Lewis said.

The miners left peaceably, he said. “And we plan to stay peaceable.”

But, miners did move down the tracks and blocked them again. By Tuesday afternoon, the picket line had mostly taken on the character of a family picnic. While miners had a pickup truck and cornhole boards sitting on the tracks, family members had a canopy set up beside them serving food and water to those in attendance.

A food truck came from JonEvan Jack’s in Corbin to feed the miners, and set up on the road behind the crossing.

At the edge of US 119, down a steep embankment from the railroad crossing, several retired United Mine Workers of America miners made their displeasure known whenever a coal truck passed by, and challenged newcomers to find out what their business was on the line. 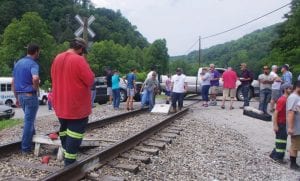 Blackjewel miners played cornhole on the railroad tracks near Cumberland on Tuesday while family members and supporters walked the picket line with them.

“Are you a rep?” Stanley Sturgill asked a well-dressed man who got out of his pickup and started up the hill.

No, the man replied. “I’m bringing them food and water.”

Sturgill, 74 years old and a 41-year member of the UMWA, said it didn’t matter to him that the miners on the tracks weren’t union, they were still miners and they deserved better treatment.

“The bottom line is, we’re UMWA members,” Sturgill said. “Those guys aren’t UMWA. There’s no UMWA in Kentucky anymore, but we’re all brothers under God.”

Bennie Massey, 69, spent 30 years underground and serves on the Lynch City Council. He was on the picket line Tuesday, greeting supporters.

Massey, who worked in mine safety, said he had seen too many miners die underground, and miners shouldn’t be risking their lives for nothing.

“It’s a risk going under and then you not get paid?” he said.

His brother George Massey, who worked in the mines for 23 years and serves as a city councilman in neighboring Benham, said officials such as U.S. Senators Mitch McConnell and Rand Paul should be doing something to help the miners. Fresh off a trip to Washington during which McConnell spoke to miners with black lung disease for less than two minutes, George Massey complained bitterly about how state and federal regulators allow companies to file bankruptcy, change their names and start over, leaving employees and suppliers holding the bag.

“Congressmen and these representatives need to stop these companies from doing this,” Massey said.

The miners got unexpected support Tuesday from a church mission group in the area doing construction work on a building in Cumberland. The group of about 30, mostly either teens or elderly church members from the First Baptist Church in Westminster, S.C., pulled up in a bus and unloaded members to show support for the miners.

Some questioned uneasily what would happen when the train tried to leave again.

George Massey told them nothing would happen until the railroad sends a work truck to make sure the tracks are safe.

“Once that truck comes out, it won’t be long,” he said.

Cumberland Mayor Charles Raleigh said the protesters don’t seem worried about the potential to be arrested for trespassing and are spending their time playing cornhole.

A federal judge approved a bidding process last week for Blackjewel mines. The fate of mines in Kentucky, West Virginia and Virginia that had employed about 1,100 miners depends on the outcome.

Raleigh said miners are upset because the bankruptcy court has approved nearly $8 million in loans for Blackjewel since the bankruptcy, but there’s still no money to cover bounced paychecks. He said the protesters have plenty of support including people who would post bail money if anyone is arrested.

Blackjewel said in a statement to employees on Tuesday that it is working toward a resolution.

“We know how eager you all are to understand what will happen to your mine and whether you will be able return to work,” the company said in its statement. “We share this desire and assure you that we are doing everything possible to bring as many employees as possible back to work as quickly as possible.”

A spokeswoman for CSX Corporation told the Lexingthere, ton Herald-Leader that the rail company is monitoring the situation and hopes it is resolved quickly. The company was not able to say who bought the coal or hired CSX to move it.

Kentucky Gov. Matt Bevin’s spokeswoman, Elizabeth Kuhn, said the Republican governor “remains committed to using every tool available” to assist the miners. Bevin’s administration is investigating the miners’ lost wages and providing staff to help in processing their unemployment insurance applications, she said in a statement.

The state’s attorney general, Andy Beshear, weighed in on Twitter with support for the miners and said he had directed his office to support their cause in any way it can. Beshear, a Democrat, is challenging Bevin in Kentucky’s gubernatorial election in November.

State Rep. Adam Bowling, R-Middlesboro, joined the miners Tuesday, saying he wants the miners to know state officials will advocate for their pay.

Jeffrey Willig, a father of six, said his bank account was overdrawn after his last paycheck from Blackjewel bounced. He says he and others plan to block the tracks “as long as it takes.”

“We’re not expecting our jobs back, we just want our money,” Willig said.

(This report was compiled from dispatches by Mountain Eagle reporter Sam Adams and the Associated Press.)