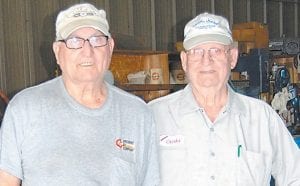 Willis “Yogi” Caudill, 79, and his 80-year-old brother Charles don’t have plans to retire from Childers Oil Company any time soon.

When Willis Caudill says he will “retire when I’m 105,” you get the feeling he is not joking. After all, he still works about 50 hours a week, mostly maintaining car washes in neighboring Pike County.

Willis Caudill has been an employee of Whitesburg- based Childers Oil for 45 years. In his early days with the company, he was a dispatcher and bookkeeper. He now prefers doing maintenance work outside. For the last 20 years he has been in charge of keeping Double Kwik car washes up and going.

“I’d work another 45 years if I could,” Willis, who earned his nickname “Yogi” because of his admiration for the former New York Yankees great, said one day last week.

Charles Caudill has been working at Childers Oil for nearly 27 years. Before joining Childers, he worked at R.H. Hobbs Co.’s “five and 10 store” on Main Street in Whitesburg for 25 years, quitting only after the store closed. 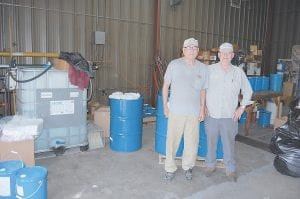 Retirement is not in the plans for Willis Caudill, left, and Charles Caudill. The brothers, 79 and 80, are pictured at work at Childers Oil Company of Whitesburg.

Charles is in charge of the oil packaging plant and works weekdays from 7 a.m. until 3 p.m. On busier days he doesn’t clock out until 4:30 p.m.

Charles makes sure five-gallon and 55-gallon drums are filled with oil or kerosene. Last week, he and his crew filled and loaded 16 pallets of drums of kerosene each day. Before the coal industry entered its current slump, Charles and his crew normally filled 30 pallets of five-gallon buckets of oil each day. Willis also was once in charge of the oil packaging plant before he began maintaining the car washes.

Obviously, the brothers have a strong work ethic.

“They are good, sound, honest, dependable people,” said Don Childers, president and founder of Childers Oil Company. “They are loyal in what they do.”

“When you work, you work,” said Charles Caudill. “That is what I was taught growing up. As long as I can do the work I am going to do it. I’m not going to play.”

Willis Caudill said that he has hired — and had to let go — several employees who didn’t particularly like to work. Charles says every member of his crew works hard at their job. He said that is a welcome change from some others who were sent over to help him load the pallets, only to have him send them back.

“ They’d get on their phones and I’d tell them that if that’s all they had to do, there is the door,” said Charles.

Willis Caudill hasn’t had a true vacation in four years. He said that every time he planned a trip, he would end up in the hospital with injuries or illness.

“I always got out (of the hospital) and went to work the next day,” he said.

Several years ago Yogi actually did take a week off from work, but decided he didn’t care too much for relaxing. Charles doesn’t like being away from work either.

“It’s not good to sit at home and look at four walls,” said Charles. “Some people like it because they can watch television.”

Willis jokes that Don Childers has never threatened to fire him.

“You couldn’t find a better job or a better person to work for,” said Willis, who can be found having breakfast with Mr. Childers on Saturday mornings at Pine Mountain Grill.

“Don has been good to me, too,” said Charles. “I get along with everybody and everybody treats me good.”

“If I was 40 years old and wanted a job, I’d want a job right here,” added Yogi. “I’ve enjoyed it and I hope they have enjoyed me.”

Charles, born in 1932, and Willis, born in 1934, are the sons of the late John P. and Pearlie Quillen Johnson Caudill. Both were born in the community of Caudilltown just west of downtown Whitesburg.

They grew up there, playing with each other and their cousins, who were the children of Curt and Essie Caudill.

The two brothers have a sister, Genevieve Richardson, 87, who lives in Irvine, Ky., and remembers that they made toys to ride and play with. She also remembers Willis working to make a wheelbarrow for himself. The boys also liked to swim in the North Fork of the Kentucky River.

In addition to Genevieve, Willis and Charles have a half-brother, Granville Johnson, 91, who lives in Indianapolis. Sister Alene Richardson, 85, lives in Winchester.

Family members remember that Willis loved to watch the Yankees play baseball and that he especially liked catcher Yogi Berra. He came to be called “ Yogi” himself during his years of playing baseball and eventually coaching the sport.

“One thing that I have learned from my dad is that you just keep working,” said Charles Caudill’s daughter, Sharon Niece of Irvine. “ Through death, illness, struggles of any kind — just work through it. Dad had colon cancer surgery late in June of last year to remove one-third of his colon and was back at work by early August. Willis has done the same thing through his issues with his heart. They just get back up and keep going. What wonderful examples to follow.”

“Neither my brother nor I lived in town so Dad took on the lion’s share of the work involved in her care,” she said. “He did that out of his great sense of devotion and of responsibility. Dad was the same devoted caregiver for his (second) wife, Ruth Polly Brown Caudill, during the last two years of her life. She died in 2011.”

Sister Genevieve recalls that Willis also gave loving, gentle care to his wife, Doris, through her battle with cancer. Doris, who worked for many years at Quillen Drug Store and The QRS in Whitesburg, died in 2001.

Charles’s son Gary lived and worked at Oneida Baptist Institute in Clay County until his death in 2009. Stepdaughter Celestina (Ruth’s daughter) died in 2010. Charles has 6 grandchildren and 9 great grandchildren.

In addition to working for Childers, Willis worked for Lewis Wholesale of Whitesburg. Willis and Doris had two daughters, Jean Ann, who lives in Nicholasville, and Jan who lives in Illinois.