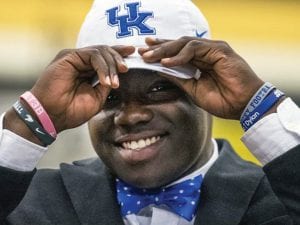 Alabama running back Kavosiey Smoke was only a three-star recruit but has the size and speed to be a productive SEC player.

He believes Kentucky, Tennessee, Auburn, LSU and Mississippi State will be in Blue Ribbon’s top 25 with Florida a strong possibility. The SEC has already announced that UK will have home-and-home games with both Auburn and Mississippi State next season. Florida and Tennessee remain two of UK’s three annual home-and-home series along with Vanderbilt.

“The league’s on an upward trend now, and I don’t think that’s going to end anytime soon,” said Dortch. “The SEC Network has been a huge recruiting tool. I think the hiring of Dan Liebovitz as associate commissioner in charge of men’s basketball was a huge move.

“Every school has a good coach, and the facilities that are needed to keep pace with other power conferences. And of course, the SEC region is loaded with players, and SEC schools are starting to keep them at home.”

While there was speculation that P.J. Washington was hell-bent on going to the NBA no matter what the player or his father said, the UK freshman would have been drafted in the second round and given a contract most of us would have like to have if he had stayed in the draft.

“It definitely was not a situation where he would not have got drafted,” Paul Washington said. “We know 100 percent he would get drafted. But he’s not just the kind of guy to go to the draft because other guys are. He knows his worth and wants to compete now for a national championship. He wants to prove he can win a national championship and carry a team.

“If there was something from the NBA (financially) he just could not have turned down, he would have taken it. But this was something he could turn down and he putting trying to win a national championship above making a couple of million dollars. That’s a huge decision. He could have made $1.5 million now but he coming back to Kentucky to win a national championship is certainly not a bad option and that’s the one he chose just like he said he would.” 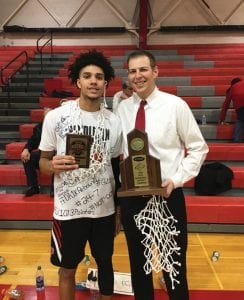 He recently had surgery on his pinky finger that was broken in January but is expected to be back at full speed for UK’s exhibition trip to the Bahamas.

Pendleton County’s Dontaie Allen will be one of the leading candidates for 2019 Mr. Basketball honors based on what he’s already done.

To help showcase that talent, Pendleton coach Keaton Belcher is upgrading his team’s schedule. For the first time, Pendleton will play in the prestigious Marshall County Hoop Fest.

“That is huge for us. Not many people here in Pendleton County have been to Marshall County, so going to Hoop Fest is a significant deal for us. Obviously, the big reason we got invited is Dontaie,” Belcher said. “Our fans travel well. It’sabouta51/2-hourdriveforour crowd but I think we’ll play on Saturday, Dec. 1, and I think we will have a lot of fans make the trip.”

Pendleton will also play in the Zip Zone Classic at Sheldon Clark — “a lot of the state’s better teams and players are invited,” Belcher said — as well as the Ashland Invitational Tournament, the state’s oldest Christmas tournament.

“All that not only challenges our team but lets our kids see different parts of the state and play against good competition,” Belcher, who had his team at Western Kentucky University for camp last week, said. “For a rural school to get to travel all over Kentucky is just special.

“In Dontaie’s career, he will have played against or in every single region in Kentucky. We want to let our kids see every part of the state. Still, a lot of this is also constructed for Mr. Basketball votes for Dontaie.

He also has a chance to earn a scholarship offer from Kentucky. He took an unofficial visit to UK — his dream school — Sunday.

“He is phenomenal socially, academically and athletically,” Belcher said. “He’s the total package. I have never heard him say a bad word about anybody. It’s never myself or I with him. It’s always us or we. He is very humble and is just a great teammate.

“He’s just a really good kid and I’ve been blessed to coach him. He’s so versatile on the court and can do so many things. College coaches see his potential and know he’s just going to get better and better.”

Duane Rankin, columnist/ videographer for the Montgomery (Ala.) Advertiser, says recruiting services are not an “exact science” but also has another thought on why running back Kavosiey Smoke was not rated higher.

“You usually build your stars up at camps and then enhance them during the season. He played with a pretty dynamic quarterback in J.D. Martin, who ran for 2,000 yards and 24 touchdowns. So you can make an argument Smoke was undervalued, but he can play,” said Rankin.

Smoke helped Wetumpka High School advance to the 6A Alabama state championship game for the first time in the school’s 115-year history and ran for 1,508 yards and 27 scores as a senior.

“He runs physical and downhill,” Rankin said. “Has an initial burst, some breakaway speed and finishes runs.”

Rankin said despite the competition UK faced, it did not surprise him that Smoke signed with the Wildcats.

“He wants to play early. Wants to play in the SEC. Kentucky fits both ideals,” Rankin said.

Is he physically ready to play in 2018 to give UK more depth in the backfield behind Benny Snell?

“I think that remains to be seen, but the big thing is to really dedicate himself this summer to get there. As far what he’s listed, Smoke looks like an SEC player, but being strong enough to handle the college football grind, period, let alone play in the SEC at that position, is tough,” Rankin said.

“He’s going to run into some guys at UK who are going to introduce him to college football. Smoke has to prove himself there first before beginning to talk about whether he’s physically ready for the SEC.”

Kentucky may have also got another three-star gem out of Alabama in receiver Allen Dailey.

The 6-3, 195-pound Dailey caught 80 passes for 1,441 yards and 23 touchdowns as a senior to help Pinson High School finish 15-0, including a win over Smoke’s team in the 6A state championship game. His 23 touchdowns tied for second most in Alabama single-season history. Allen, who was also a star basketball player, picked UK over Louisville and several other schools.

“It’s crazy, but it creates a situation where they could be the two players who can take UK to the next level,” Rankin said. “They can relate to each other, vibe off each other and push each other. If they have early success, others from the state of Alabama could follow.”

Quote of the Week: “My guess that he is better. He looks more confident now than when I saw him a year ago as a person. We need him to be better,” Kentucky coach John Calipari on sophomore center Nick Richards.