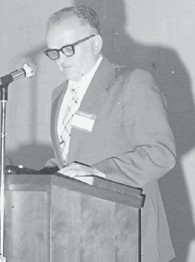 Sixty-six years ago on April 1, 1949, the Kingdom Come High School had a graduation of 13 class members. To all of us it was a great day, but a sad time also .

We had all been together for four wonderful years and we felt like sisters and brothers to each other. We loved each of our teachers as we would our parents. They were so special to us.

They were with us every day during the school hours for four years. They taught us our classes and also how to associate with each other in a special, loving way, and to be able to get along in the world around us, and also abroad.

We learned respect and friendliness and love for people we would come in contact with in our future lives, away from school and our families and home with our parents. They taught us to always respect our parents. To me, love and respect will always get you through life easier than getting disrespectful and feeling better than your fellow man.

We all parted that day with hugs, kisses and tears as we said goodbye to our friends and our teachers. They all came to us to give us hope and luck in our days to come. They also had tears in their eyes and hugged us and let us know they cared about us. It’s a day I’ll never forget. It was a great day. 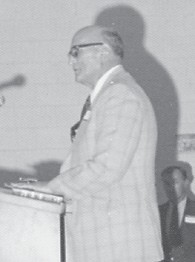 We all went our way in life for 25 years, not really knowing what each of us was experiencing.

At that time in life, Bernice (Cornett) Baker and I stayed in touch by letters. We decided we wanted to have a class reunion. I was living in Harrisburg, Ill., and she lived in Indianapolis, Ind.

I was in the process of moving back to Kentucky in 1973. Claude’s job with Peabody Coal Co. had closed down and he came back home to Kentucky first to find a job so we could come also .

He got a job with Bethlehem Coal Corp. at Deane. Then he came and brought us home. It was the happiest day for me. I loved Kentucky.

Bernice came down to stay for a few days with her parents so she and I could get together to start plans for our school reunion, our 25th since graduating. We decided to just have all the classes which had graduated from Kingdom Come High School to be with us. 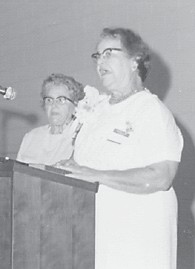 We started getting addresses and phone numbers and visiting with others we knew to help us pull this off, and to help find their friends and families.

Our classmates, Charles Burton Cox and his sister Laura and Glennon Ison and others, would set a date to meet to plan this big event.

We decided to all meet on Little Kingdom Come Creek at the school where Harding Ison had taught school for years. So we did. He was Glennon’s brother.

There were about 15 years of us who got together at his school and had a square dance and food, and sat around and planned what we would do, and have to eat. 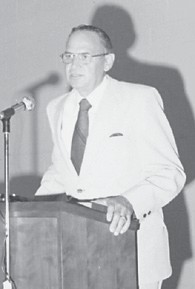 The cooks at the grade school cooked for us. We had ham and chicken, green beans, potatoes, slaw, and cake and cobblers, milk, Kool-Aid, cake and ice cream.

While Bernice and I were getting the tables all fixed, she was letting the tables down from the wall where the school had put them in the gym for the children to eat lunch. One fell out on her and she wasn’t strong enough to hold it up, and it fell on top of her.

She was hurt really bad, and we had to call an ambulance to come and take her to Harlan Hospital. It was terrible to see her so hurt, but we had to finish getting everything ready for the next day. It was on my shoulders then, but a lot of other people helped me. It was sad not to have her. I cried for her and prayed.

The theme was “Silver Memories, Let Us Be Known By Our Deeds.”

The time came and everybody started arriving and I was so scared it would be a flop, but my classmates were there early to help me, and we got it done just fine. 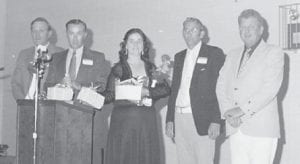 Mrs. Harold ( Grace) Kingdom, who had worked as a nurse in the community while her husband taught school, was our speaker. She had slides to show everyone of the time that they lived in the cabin up on the hill from the school. They were wonderful pictures of the people of the surrounding areas.

Thelma Nolan Cornett told the history of how the school got started and her Uncle John D. Huff gave the property for the school to be built onto the Methodist Church.

There were 250 people I counted who came, and five of the first graduating class were there. Forrester Ison was the keynote speaker.

Thelma and Mrs. Kingon got to be Kentucky Colonels from our class. We also gave them orchid corsages.

Our principal, Forester Ison and wife Ilavae were there. Venon Whitaker and Ethylin, his wife, were there, and all the Jim Whitaker family who had been teachers were there.

Gladys Hogg, Evalee, Pauline, Renavae, Glenn, and Arlie, all Whitakers were there. 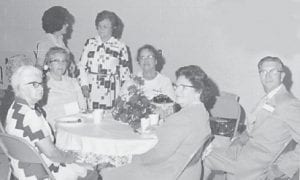 The first five were Thelma, Della Shepherd (Nolan), Monette Huff Ison and husband Kirby, and the other two people I have forgotten their names. He was a Boggs.

I had to open, then I turned it over to Glennon B. Ison and Kenneth Ison, Burton Cox, Donald Shepherd and the teachers.

I got Mr. Ison a plaque with a poem about a tree. He was pleased with it. He taught me English and literature and math and geometry.

We gave Venon a statue of a ballplayer with the green and white outfit on. He and Forrester were basketball coaches a lot during those years. They had great teams.

Ellis Morgan and Beatrice, Bobbie Whitaker from News Press at Cromona, were there.

Lee Sexton and his group of musicians were there to play music for the square dancers, and Gladys Hogg, Roxie Fern Jones, Louise Breeding, who used to be a teacher.

He just died on March 3 of this year. He lived in Indiana. My sweet, dear friend Bernice Cornett Baker called me and told me that evening. She lives in Greenwood, Ind. She told me that Coburn had been really sick for about a year. Bernice isn’t doing well herself.

After that first reunion, when she got hurt she had bad pain with arthritis all the time. She is a widow now like me, and we are both about the same age.

One of our other classmates was Vivian Huff, a daughter of John D. Huff. She died years ago.

Reba Blevins of Port Angeles, Wash., is married to Estill Cornett. They went to Washington just after we graduated high school. They were both schoolteachers there for many years.

Those still living are Bernice, Reba, Bob Akemon and myself, and Glennon B., out of a class of 13.