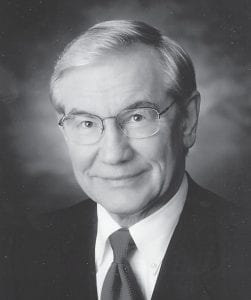 Kentucky Baptist Convention Executive Director Bill Mackey, a former pastor at the First Baptist Church in Whitesburg, said he will retire after more than 13 years of leading one of the state’s largest religious organizations.

Mackey, 69, has served in the position since February 1998, replacing Bill Marshall who retired in 1997. Mackey said he and his wife, Kay, plan to move to North Carolina to be nearer to children and grandchildren.

Mackey told the KBC Mission Board’s Administrative Committee on Tuesday that he will retire on May 31, 2011.

“It has been one of the great privileges of my life and ministry to serve our Lord Jesus Christ by serving the Kentucky Baptist Mission Board and Kentucky Baptists,” he said in a letter to the Administrative Committee

Church planting has been a major emphasis. On Mackey’s watch, the KBC began developing “high impact churches” that were started with the intention that they would quickly grow into congregations that, in turn, would begin other churches.

More recently, the KBC was an active partner in the “Find it Here” evangelistic campaign that saw Kentucky Baptists deliver a gospel message to more than 1.3 million Kentucky homes earlier this year.

Kentucky Baptists also engaged in numerous major disaster relief responses during Mackey’s tenure including the World Trade Center attack in 2001, Hurricane Katrina in 2005, the Kentucky ice storm of 2009 and the Haiti earthquake in 2010.

That move to Kentucky was a homecoming of sorts after he had served as pastor of the First Baptist Church of Whitesburg from 1969-1979 prior to his call to denominational service in South Carolina.

The Kentucky Baptist Convention is a cooperative missions and ministry organization made up of nearly 2.400 autonomous Baptist churches in Kentucky. A variety of state and worldwide ministries are coordinated through its administrative offices in Louisville, including: missions work, disaster relief, ministry training and support, church development, evangelism and more.