Review: A haunting tale of woman held for ransom

By RASHA MADKOUR
The Associated Press 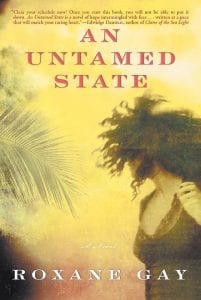 A poignant new book by debut novelist Roxane Gay begins with these haunting words: “Once upon a time, in a far off land, I was kidnapped

Meet Mireille Duval Jameson, a Haitian-American who is held for a $1 million ransom as her wealthy father does the unthinkable and refuses to pay up, while his daughter suffers unspeakably at the hands of her captors.

“An Untamed State” goes back and forth in time, revealing a childhood heavy with the demands of a disapproving father, a heartachingly sweet courtship with the man who became her husband, and a woman who remains defiant even in captivity.

The abuse Mireille suffers is unimaginably cruel and profoundly disturbing, but Gay handles it well and it doesn’t come off as gratuitous — just frighteningly realistic.

When Mireille is finally freed, her rocky adjustment harkens to that of the mother in Emma Donoghue’s “Room”; even if no longer in captivity, both women are irreversibly altered by their experience.

As a Haitian-American, Gay writes of her homeland beautifully, describing it in the conflicting, nuanced way that will ring familiar to Americans whose parents hail from troubled lands: “There is nowhere in the world both as beautiful and as ugly, as hopeful and as hopeless.”

Her gorgeous writing is consistent throughout the novel — descriptive and evocative without being florid and overwrought.

The book also features one of the most touching relationships between a woman and her motherin law, each taking turns helping the other heal.

The ending twist is a stretch and wholly unnecessary; that, and the unanswered question of why Mireille’s father ultimately ended up paying the ransom, could have spoiled the story had the rest not been so solid. Luckily for the reader, it’s a wonderful and affecting read, warts and all.