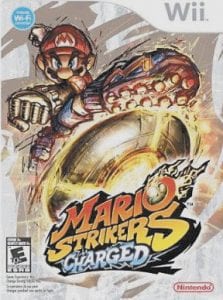 Have you ever played a Mario video-game? Have you ever thought of Mario playing soccer? This might seem a weird combination for people who have played Mario games, but it’s a surprisingly fun game. This article will teach you, if anything, that Mario and friends plus soccer equals lots of explosions and fun.

“Super Mario Strikers Charged” has a pretty easy control scheme, with the Wii remote and the nun chuck attached together. The B button on the Wii remote is used for shooting the ball, the A is for passing, down on the control pad is tackle, and shaking the remote left to right is a slide tackle. With the nun chuck, the analog stick moves your players, the C button uses items, and if you hold in the Z button you use lob shots (by pressing B) and loft passes (by pressing A). If these controls seem hard right now, they aren’t after a little bit of practice.

In this game Mario and his friends are in a soccer tournament called the “Strikers Cup” against Bowser and the rest of his dastardly villains. None of these people came for a nice wholesome game of soccer, but instead brought some “toys.” The destructive toys range from banana peels to trip your opponents, to the wonderful Bob-Ombs which explode in your opponent’s face.

A new addition to this sequel is player power-ups. These are items that only your team captain can use, and range from making Donkey Kong do an area attack on the ground to Mario “relieving himself” all over the field to mess up your opponent’s controls.

Another new addition is that when your opponent uses the Mega Strike (a super shot on the goal), you have a chance, as goalie, to block the shot and save your team from defeat.

The game has many major modes to choose from. Some modes are road to strikers cup (a campaign mode) and grudge match (versus). A new addition to the game is strikers challenge, which is a mode with many different challenges like winning a game with one man down, but there are rewards like getting cheats and unlocking characters.

“Super Mario Strikers Charged” also comes with a tutorial mode that really helped me learn the game. The greatest mode (in my opinion) is the wifimode, where you can play against strikers all over the world and raise your rank higher.

This is one of the greatest games I have ever played. If you don’t have a Wii, get a friend that has a Wii to go to Wal-Mart and buy this game right now.

Zach Joseph, 13, is a student at Whitesburg Middle School.