Review: The Wombats are unique 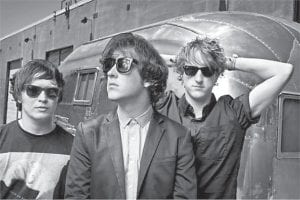 Even though September 22 marked the Ohio State vs. University of Alabama-Birmingham football game and the sports bars in Columbus were flooding with people, another event brought a very large crowd to one of the college city’s many music venues, The Newport Music Hall. This crowd was gathered to watch none other than The Wombats, a Liverpool band whose sound is so unique and witty it is hard to compare them to any other group of this time.

Supporting the unique trio on the tour were fellow Englishmen, Morning Parade. Despite the fact that the band has found little fame in the U.S., they have received critical acclaim in their home country, including radio time for their first single “Under the Stars.” The group’s sound has also been deemed “robust indie with stadium ambitious, passionate vocals and penchant for rave-rock rhythms” by one UK daily newspaper.

“Under the Stars” was just one of eight songs the group played to open the show; others included “Carousel,” “Born Alone” and the recent single “Headlights.” While playing these songs with great precision, it became clear that Morning Parade, who are scheduled to open for Smashing Pumpkins during the next two months, are on the verge of receiving headliner status and should shortly have a large enough North American fans base to launch a headlining tour of their own.

After Morning Parade gained several fans from their “arena rock” performance, the time had arrived for The Wombats to make their appearance. The band is led by singer Matthew Murphy. The drummer is Dan Haggis and Tord Overland-Knudsen plays bass. They started their set off strong playing songs like “Our Perfect Disease” and “Kill The Director.” Then Murphy took a moment to address the crowd saying, “I’m not going to lie, this is one of our favorite places to play on tour. It’s a bit of a home away from home so thank you so much for making it feel like that.” They then began ripping through their set with songs like “Party in a Forest (Where’s Laura),” “Techno Fan” and “1996.”

While playing several more songs, including “ Valentine,” “Moving to New York,” and their recent radio hit “Jump Into the Fog,” the group and fans exhibited high energy. Jumping up and down, shouting out choruses, and bopping along with every song, both made it clear they were happy to be in the company with one another. This was apparent when the group took a break between songs to do the “Ohio chant” (a call and response chant that is very popular in the Ohio State campus territories, especially on game days). This started off with the band calling out “O-H” and the audience responding with a thunderous “I-O.” As soon as the response finished echoing throughout the venue, beaming smiles appeared on all three of the group members’ faces. Without saying another word, the trio finished their set by playing two more songs, “My First Wedding” and “Tokyo (Vampires and Wolves),” and then leaving the stage.

After several minutes of the crowd chanting multiple things, including the band’s name, song titles, and “O-H-I-O”, the band made their second appearance on stage.

Addressing the crowd Murphy said, “I know that we are not the only band that comes here and makes you spell out Ohio, but we have to because nobody does this in England!” With that the audience erupted as Murphy continued, “And that’s why we have to do it possibly one more time. If that’s alright with you?” With that, Murphy, accompanied by the rest of the band, took a deep breath and shouted for one final time “O-H” and the crowd triumphantly shouted “IO.” The group then played an encore comprised of “Anti-D,” “Let’s Dance the Joy Division” and “Outro Jam.”

• “ Schumacher the Champagne” — The Wombats

• “Kill the Director” — The Wombats