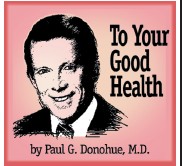 DEAR DR. DONOHUE: My daughter, 37, has rheumatoid arthritis. Is it genetic or a diet/lifestyle illness? What can be done to alleviate her discomfort? I read somewhere that cod liver oil brings relief. — H.B.

ANSWER: Arthritis comes in many guises. Osteoarthritis is the most common kind. Nearly everyone has a touch of it before death. Rheumatoid arthritis affects about 1 percent of adults, with two women afflicted for every man. It makes its appearance most often in the 40s and 50s. The lower two knuckles of the fingers, the wrist, elbows, ankles and foot joints are the ones most often attacked, but any joint can be affected, including the shoulders and hips. It’s a symmetrical arthritis, meaning that the same joint on the right is stricken as the one on the left. It’s also a systemic illness. The body as a whole suffers. Fever, weight loss and fatigue are common in many stages of this illness. The eyes can become inflamed, as can blood vessels. Changes in the lungs are possible.

It’s not a diet/lifestyle illness. Genes play a role, but not the entire role. The immune system is involved. Cod liver oil is no longer used for treatment.

A new dawn has broken for the treatment of this often-disabling affliction. Formerly, anti-inflammatory drugs like Motrin and aspirin were the initial treatment. Now treatment most often begins with drugs called disease modifying anti-rheumatic drugs, DMARD. These medicines have the potential to stop the progression of the illness. Methotrexate is one example.

A brand- new class of rheumatoid arthritis drugs, the biologicals, neutralizes body chemicals that lead to joint inflammation and deformity. They can halt the arthritis process in its tracks — not always, but enough of the time to call them amazing. Some names are Humira, Kineret, Actemra, Enbrel and Remicade. They also have powerful side effects that have to be quickly attended to. Your daughter lives at a time that is a good one for people with this illness.

The booklet on arthritis describes the various kinds and their treatments. Readers can order a copy by writing: Dr. Donohue — No. 301W, Box 536475, Orlando, FL 32853-6475. Enclose a check or money order for $4.75 U.S./$6 Canada with the recipient’s printed name and address. Please allow four weeks for delivery.

DEAR DR. DONOHUE: I am a 76-year-old man with COPD (chronic obstructive pulmonary disease — emphysema and chronic bronchitis). I am relatively symptom-free and have reduced the use of my inhaler to one puff in the morning and in the evening. I jog and walk two miles, three times a week, in 25 minutes and have done so for the past four years. Am I putting undue stress on my heart? Am I hurting or helping myself? — R.S.

ANSWER: You’ve stuck with this program for four years and are now using less medicine than you did. It appears to help you. Your regimen isn’t a dangerous one. However, I have to stop short of giving you carte blanche approval. Only your doctor can do so. He or she knows all aspects of your medical history; I don’t. I’m pretty sure you’ll get the doctor’s OK.