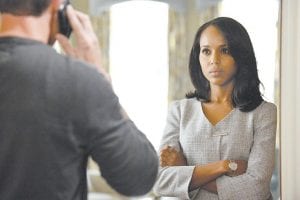 This publicity image shows Kerry Washington in a scene from “Scandal.” The series is one of three by Shonda Rhimes that will air on Thursdays. (AP Photo/ABC)

Let’s just go ahead and make it official. “Thursday” should be renamed “Shonday.”

At least it should on ABC, which has handed its entire Thursday prime-time schedule to drama doyenne Shonda Rhimes.

Starting this week at 8 p. m. EDT, it’s “Grey’s Anatomy,” with Rhimes the showrunner for this medical melodrama’s 11th season. At 9 p.m., “Scandal” begins its fourth year with Rhimes also serving as showrunner.

Then, closing out Shonday at 10 p.m., “How To Get Away With Murder” premieres with Viola Davis as a rife-with-mystery criminal lawyer who apparently will do anything to spring her clients and who, as a law professor, trains her students to do the same.

Unlike the other two series, created by Rhimes, “Murder” was masterminded by Pete Nowalk, whose producing credits include “Grey’s” and “Scandal.” On this wicked new addition to the ShondaLand portfolio, Rhimes will serve “only” as executive producer: “I’m like the grandmother,” she joked. “I hold the baby, then I give it back.”

This baby has a clear family resemblance: “Murder” crackles with rat-a-tat dialogue, larger-than-life characters, outrageously tangled narratives, and a rainbow coalition of a cast led, as with “Scandal,” by an African-American actress.

“It’s a show I never would have thought of in a million years,” Rhimes said. “But I feel like it fits exactly in the ShondaLand brand.”

Fittingly, the “Murder” heroine is driven, charismatic and diabolical, even more so, arguably, than “Scandal” cleanup queen Olivia Pope (played by Kerry Washington).

“I really wanted to create a character who’s always 10 steps ahead of us,” said Nowalk in a separate interview. “If I know what a character’s going to do before they do it, what’s so interesting about that? And if they’re always likable and good in what they do, I don’t find that relatable.”

“We operate not from our morals,” said Davis, savoring the mindset of the character she plays. “We’re driven by need, no matter how messy it gets.”

Though a veteran actress whose film credits include “Traffic,” ‘’Antwone Fisher,” ‘’Doubt” and “The Help,” Davis is a newcomer to ShondaLand. But she was quick to size it up as “like a family,” headed up by a matriarch “with courage, imagination and ability.”

The “ShondaLand” handle began as “kind of a joke,” said Rhimes. Then, for the company it now identifies, it took hold as shorthand for a shared mission statement. “We all know what we’re talking about in terms of the work and the attitude, and that term sums up our goal.”

A storyteller from childhood, the Chicago- born Rhimes had written the script for the 1999 HBO film “Introducing Dorothy Dandridge,” followed by the Britney Spears hit, “Crossroads,” and the 2004 sequel to “The Princess Diaries.”

But it was “Grey’s Anatomy,” a 2005 midseason replacement, that put Rhimes and ShondaLand on the map.

Today, at age 44, Rhimes reigns as a hitmaker unmatched in TV history, just days from not only ruling a full night of ABC real estate, but also stewarding two broadcast-network dramas with black women as protagonists.

“Why did it take somebody black to talk about being black?” Rhimes said, marveling that TV has stubbornly resisted mirroring the world she and most people live in, a world she has tried to reflect through her matter-of-fact inclusiveness of race as well as gender, age and sexuality.

“There is no token system,” she said. “We’re gonna cast the best actor for the part. And then our cast makes it feel real and true — they elevate everything.”

(Last week, Rhimes shot back at a New York Times columnist who, in a widely criticized column, referenced her as an “angry black woman” and wrote that that “ How To Get Away With Murder” was “yet another showcase series from her production company to showcase a powerful, intimidating black woman.”

“How come I am not an ‘angry black woman’ the many times Meredith (or Addison!) rants?” Rhimes tweeted. The Times public editor on Monday called the article “astonishingly tonedeaf and out of touch.”)

But ultimately everything issues from Rhimes. All roads in ShondaLand lead to her, which begs an obvious question: How does she do it all, turning out this quantity of product while preserving a consistency of vision and voice?

“ There’s a feeling of flying by the seat of our pants,” she said. “And it seems sometimes like we’re telling something crazy. But it doesn’t feel crazy to us. There’s a plan to what we’re trying to tell, with larger themes that I feel strongly about.”