Rhythm of the Cuban kitchen star of Estefans’ new cookbook 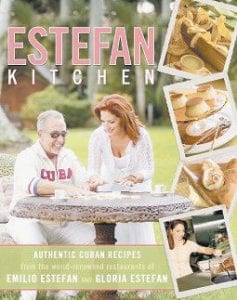 He’s a Grammy-winning record producer. She’s known as the Queen of Latin Pop. Together, Emilio and Gloria Estefan have become one of the most powerful couples in the music industry.

But in the world of celebrity cookbook authors, where Rachael Ray and Paula Deen reign, the Estefans have found their spot with a growing niche — Cuban food.

“We have a big hardcore following of the Cuban food, and we were getting so many questions from people that go to our restaurants, asking us ‘How do you make this?’ and “How do you do that?'” Gloria Estefan said. “We knew we had to come up with something.”

That something was “Estefan Kitchen,” a compilation of over 60 traditional recipes, from yucca frita (cassava fries) and boliche (Cuban pot roast) to pudin de pan (bread pudding) and mojitos, all selected from dishes of their restaurants, Larios on the Beach and Bongo’s Cuban Cafe, with locations in Miami Beach, Orlando and Mexico. There’s also recipes from the couple’s home kitchen.

“They can take the book home with them and learn to make the food in their own kitchen, even if they’re not Cuban,” Estefan said. “It was a fantastic way for me to be able to promote our culture through food the way I do through music.”

Fan of the Estefans also will appreciate personal anecdotes and family photos sprinkled throughout the book.

“Whenever I have time with my kids, I love to whip something up for them because I make it with a lot of love,” Estefan said. “I take a little extra time in the kitchen, because you really want to make the people you love as happy as possible — something my grandma did for me.”

The book is dedicated to the couple’s older relatives, a nod to the strong culinary current that runs through the family.

Estefan’s great-grandfather served as the chef for two Cuban presidents, while her paternal grandfather managed one of the first Cuban restaurants in Miami. Meanwhile, her grandmother, Consuelo Garcia, shortly after arriving from Cuba in the 1960s started a business serving homemade pan con lechon (roasted pork) sandwiches, ham croquettes and tamales to little leaguers at a Miami park in Miami. Before long, she was earning about $5,000 a weekend.

With the cookbook behind her, Estefan has turned her attention to a screenplay project with and about legendary pop singer Connie Francis. She also is writing the third installment of her best selling children’s book series, which centers on the adventures of a kindhearted bulldog named Noelle.

“Deep down inside, I think being a writer is probably my biggest identification in this career,” Estefan said. “It’s been a great way for me to communicate more with my fans.”