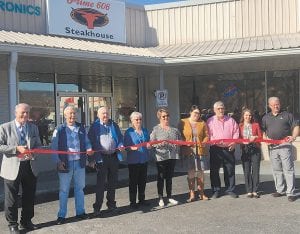 A ribbon cutting was held in West Whitesburg March 8 to mark the official opening of Letcher County’s newest restaurant, the Prime 606 Steakhouse, located next door to Las Penas Mexican Restaurant in the Parkway Plaza Shopping Center. On hand for the ceremony were (from left) three Whitesburg city officials — Councilman Larry Everidge, Mayor James W. Craft and Councilman James Bates — and Olive Gabbard, the mother of Jackie Colwell, center, who co-owns the restaurant with her husband, Charles Colwell, who is standing third from right between Colwell daughters Whitney Campbell and Amanda Maggard. At far right is Tom Shampine, a representative of Knoxville-Tennessee based U.S. Foods, which provides the prime grade of beef the restaurant uses. Only two-percent of beef sold in the U.S. is graded prime. The restaurant is now open Tuesday through Sunday, from 4 to 11 p.m.