Rich Robinson of The Black Crowes to appear here 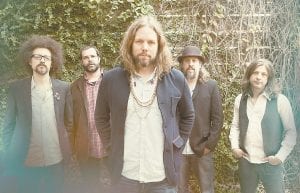 Letcher County will host one of rock music’s elite performers early next month when Rich Robinson (center) of The Black Crowes and his band play the 150-seat Appalshop Theater on August 4. The concert is a fundraiser for non-commercial radio station WMMT-FM. Tickets, $30, are still available by calling Summit City at 633-2715 or Greg Napier at 606-434-8648. Rich Robinson writes all the music and plays lead guitar for The Black Crowes, which he founded with his brother, Chris. The band burst onto the national scene with its 1989 debut album, $hake Your Money Maker, and its hit single Jealous Again. While the Crowes are on temporary hiatus, Rich Robinson is touring in suppport of his third solo album, The Ceaseless Sight, an effort which Rolling Stone critic David Fricke says “is the bull’s eye.” New York rock band Hollis Brown will also appear at the Appalshop show. The band’s latest album is a remake of Velvet Underground’s Loaded. (Photo by Alysse Gafjken)