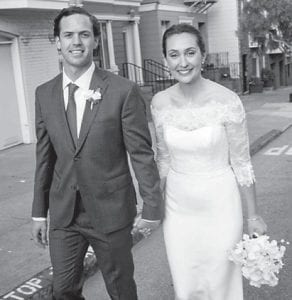 Anna Gabriella Richardson and Davis Cochrane White were married March 16 at the Episcopal Church of St. Mary the Virgin in San Francisco, Calif. The ceremony was performed by the Rev. Scott E. Richardson, the church’s rector, assisted by the Right Rev. Marc Handley Andrus, the bishop of the Episcopal Diocese of California.

The couple met in December 2010 when both moved to California to work for branches of Google. She is a communications manager for the company’s YouTube video unit in San Bruno, and he is a manager at Google in Mountain View on the corporate communications team.

After a honeymoon trip to Africa, the couple will reside in San Francisco.