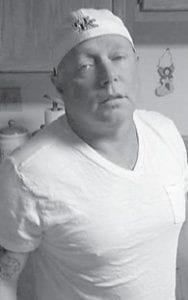 Michael Todd Richardson, 51, died August 7 at his residence in Cromona.

Born in Whitesburg, he was a son of Joy Richardson Venters and the late John Richardson Jr. He was also preceded in death by a brother, Richard Van Richardson, and a sister, Fredia Rose Webb.

Surviving in addition to his mother are a daughter, Mychaela Stephens of Farmville, Va.; a son, Michael Kayne Richardson, who is serving in the U.S. Army; his stepfather, Neal Venters of Richmond; two brothers, John Allen Richardson and wife Jenny of Neon, and Denny Richardson of Cromona; a sister, Beverly Hogg and husband David of Premium; and several nephews and nieces.

Funeral services were held August 10 at Letcher Funeral Home. Burial was in the Riley Bentley Cemetery at Deane.