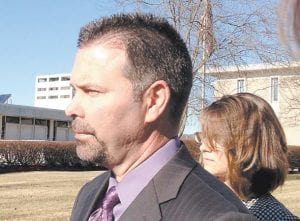 Former Kentucky Agriculture Commissioner Richie Farmer stood outside the federal courthouse in Frankfort earlier this month, minutes after a U.S. District Court judge sentenced him to 27 months in federal prison for abusing his public office. Farmer is a former University of Kentucky basketball player. He heads to federal prison March 18. (AP Photo/Brett Barrouquere)

The University of Kentucky may have retired Richie Farmer’s number 32 jersey, but the federal Bureau of Prisons is bringing it back.

The prison system has assigned Farmer inmate number 16226-032 for use when he reports to a yet-tobe revealed facility by March 18.

The former Kentucky Agriculture Commissioner is set to serve 27 months behind bars after pleading guilty to abusing his public office.

Farmer gained basketball fame as part of “The Unforgettables” — a group of Wildcats who stayed with the program through NCAA sanctions and led Kentucky back to the NCAA tournament in 1992.

The school hangs Farmer’s basketball jersey from the rafters of Rupp Arena in Lexington. The inmate number will be worn on his prison jump suit.