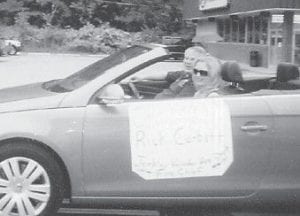 When Rick Corbett accepted the Outstanding Citizen Award at the Jenkins Homecoming Days Festival, many commented about his very humble and gracious acceptance speech. His quiet and even seemingly bashful demeanor leads one to wonder how he could ascend to a leadership role and chief of the Jenkins Fire Department.

The answer became obvious as Rick was quick to praise all of the people around him who spend endless hours training to respond quickly to save lives and property in the case of an emergency. He accepted the award not for his individual achievements but on behalf of all of the caring, community-minded and dedicated volunteers who surround him.

Jenkins Mayor Charles Dixon and the Jenkins City Council recently presented Rick with a plaque of appreciate for his 25 years of service to the community. “Our city has traditionally been a group of proud people who work hard and come together to face adversity. We garner our strength by joining together in a spirit of volunteerism with a determination to make our community better. Rick is a shining example of being an unselfish community servant,” said Dixon.

Rick is a graduate of the University of Kentucky, Hazard Community College with a degree in fire science. He is also certified as an emergency medical technician and has received training to handle hazardous materials. Through the years he has logged more than 4,000 hours of training and is a Kentucky and national certified firefighter. In addition to serving as fire chief for 14 of his 25 years, Rick has also found time to serve on the Jenkins City Council and is a volunteer in our schools.

Rick resides in Jenkins with his wife Karen and their two children, Sarah and Matthew. Karen is a guidance counselor in the Jenkins Independent School System and Sarah attends Jenkins High School. Their son Matthew attends Southeast Kentucky Community and Technical College in Whitesburg and, like his dad, is also pursuing a degree in fire science. Matthew also serves as a volunteer fireman under his dad’s guidance. For his day job, Rick works as a laboratory technician at Whitesburg Appalachian Regional Hospital.