Ride along the river was pleasant 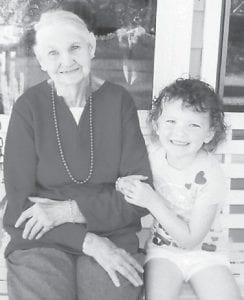 I hope all you dads and grandpas and whoever had a great Father’s Day. I am a firm believer just because you can produce a baby, doesn’t qualify you as a father or mother.

My dad was far from being the perfect dad, but he worked many a hard day to raise us kids by working in the coal mines. Our dad, Clayton Hall, was one of the best workers that ever came out of those eastern Kentucky mountains. We never went hungry and Mom made sure we were clean.

I hope the weather is as nice everywhere as it has been in the Ohio Valley area, at least in my little corner of the world.

I am afraid to ask how is everything in your part of universe, as it seems there’s been so much heartbreak in homes.

My heartfelt sympathy goes to the family of Travis Morton of Jeremiah. I am sorry to say I never met this young lad, but he touched my heart for the past two years as he struggled to live a full life with that dreaded disease that discriminates against no one.

Travis was active in Relay for Life, he loved music, and lived a full life. I was friends with Travis on a website called Facebook. I really admire his mother Melody for her ability to keep her faith and not question why this happened to her son!

My sympathy goes out to another mother, Shelsie Paige Shipp, after losing her daughter in a car wreck. Shelsie is the daughter of the late Wid Page of Whitesburg. Wid and Minnie were neighbors of my brother Jerry and Mattie Hall. I met Shelsie several years ago, and really liked her.

I called a friend, Sadie Clark, and we decided to go for a ride along the river. I drove the van as we could see out of the windows better, and we ended up in Vevay, Ind.

On the way back we stopped to listen to music at a large RV park, as someone said Rural Route 2, a band from Rising Sun, Ind., was playing there. I didn’t realize it was invitation only, being in the RV park.

When Rural Route 2 started playing music of course all cares disappeared, sitting in the open air, as the sun was going down, a cool breeze blowing my hair so gently against my neck and face.

Sadie wasn’t feeling well so I thought I wouldn’t be dancing. That is, until I observed a young woman tapping her feet, I waited a few more tunes then as my heart, soul and feet filled with the longing to dance, I asked the woman if she danced and she said no.

The woman sitting next to her said she danced but she had flipflops on, so we ended up dancing with her barefoot and me in my sock feet as I couldn’t move on the rough cement in my gym shoes.

While the band took a very short break the woman, whose name was Shirley, disappeared. When she returned she had gym shoes on. Needless to say we danced almost every dance the band played except for a couple of slow ones.

The band played ‘Clinch Mountain Back Step’ by request. As the band began to play this tune I held out my hand to a tall guy who had been dancing behind a chair. At first he was hesitant then joined Shirley and me. The pretty blond woman who said she didn’t dance, well I enticed her to join us and without hesitating she was on her feet. All I can say I think we did a little twist and maybe a hootchie-cootchie to Ralph Stanley’s ‘Clinch Mountain Back Step’.

When the concert was over I left the RV Park feeling like someone had given me a shot of something as it felt I had the world off my shoulders.

The pretty blond woman was the guitar picker’s wife. Rural Route 2 is made up of Bruce on guitar, Greg on banjo, John on bass, and Gary Eldridge on the mandolin. At the end of the show the band did a gospel song without music with Gary Eldridge, and it was so beautiful. Gary is a great singer and the band has great harmony on anything they do.

Gary reminds me so much of myself as he is never at a loss for words. He sort of fronts for the band as he has the personality to do this. Actually Gary would make a good politician.

How a little dancing, laughing and being silly can revive my spirit. As I fell asleep I was smiling recalling how though I was among strangers, I had a great time.

Oh well that isn’t the first time I have crashed a private party. Let me see, the first time I was ever guilty of that trick, a couple of friends and my husband and I had gone out to eat at Trolley Tavern a unique restaurant back in the day. A banquet room was connected and our friends knew the band, and of course one of the band members saw us, so we asked to join the wedding reception.

I have to admit we knew absolutely no one at the reception, but I ended up having a ball that night.

Several years ago my friend Ma Crow was playing a gig out in Indiana, not too far from where I live.

Ma invited my friend Mary Key and me as her guests to the party, which was a potato something in a huge barn with farmers and friends. This was sort of private or invitation only affair also.

When Mary and I arrived I had to laugh as I knew several people, one being the Mayor of Harrison and his brother and family. We had a great time there also.

Gwen Huff Farmer had another surprise as her son Forest Farmer and his wife Sherry stopped to visit her as they were on their way to another town. Gwen is having green beans among other vegetables from the garden, which she is enjoying immensely.

I haven’t talked to Shirley Wells this week except for a few minutes on the computer. Please keep Shirley in your prayers as she is going through some rough times emotionally.

My brother Richie Hall isn’t feeling well at all. He seems to have few good days and then he’ll be in so much pain.

As far as myself, thank God, I am recovering at top speed as far as I am told.

I think I will try to invent a pillow or body mold to help those like me who have open heart surgery to sleep at night.

When I lay flat on my back it feels like the incision is trying to unzip! I turn on my side, you women who have had this surgery knows exactly what I mean. I have to use a pillow to try to get comfortable.

Sometimes I wish I had a good recliner to sleep in as mine is old and I don’t have the strength to kick it back to recline nor to pull the lever for upright position.

I guess I should just quit moaning and groaning and be thankful I have recuperated and back doing everything as before, except I haven’t tried to mow the grass yet!

Hello Oma Hatton. I am glad to hear you and your family are doing great.

Shirley Godbey and I went to Hunters Pizza as Bluegrass Favorite Band with Tony Hale was there, and it was double pleasure for me as I got to see my new friends Les and Pat Wagner, who were there.

I really love this couple though we have only met a couple of times. Larry Hasty and his wife, whom I am not sure if they are relation or friends, were there also among others. Since I am so bad with names, I am afraid to write something I am not sure of.

Tony Hale also plays the guitar and does a lot of lead singing with Special Delivery bluegrass band. Tony is a very good singer and a wonderful person.