A scary moment at Jenkins festival 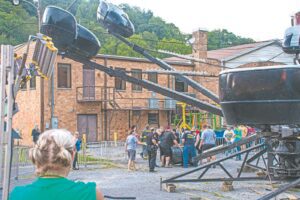 Emergency personnel and others tended to two juveniles who were injured Saturday at the Jenkins Homecoming Days Festival when one arm of “The Spider” ride on which they were passengers malfunctioned and collapsed, plummeting them toward the ground. The juveniles were treated for their injuries and released from a local hospital. (Photo by Chris Anderson)

The incident happened just before 8 p.m. Saturday evening as the 2021 festival was in full force. A witness said an arm of “The Spider” spinning ride broke loose when the passenger compartment was at its peak altitude of between 15 and 20 feet. A compartment and its two juvenile occupants, both boys, plummeted to the ground and slid upright approximately 35 feet before coming to rest.

Jenkins Volunteer Fire Department personnel, along with Jenkins City Police and others worked to free the boys from the ride using air bags. The two youths were then transported to the hospital by ambulance but were treated for minor injuries and released that night.

Two other juveniles who were on the ride but in different passenger compartments were stranded for several minutes in the air while emergency personnel responded to the incident. Those juveniles were not injured.

The carnival was shut down immediately following the incident. The carnival rides at the festival are owned by Fun Time Family Amusements of Wise County, Virginia, which was contracted by the Jenkins Homecoming Days Festival Committee. Jenkins Mayor Todd Depriest said the carnival ride passed inspection by the Kentucky Department of Agriculture earlier this year. The Department is now investigating the mishap, Depriest said.